In several previous posts we noted that the Investigative Judgment builds on two other Adventist doctrines – Biblical Arminianism and Soul Sleep. Second, we saw that in the Sanctuary, Adventists have a solid basis for assurance. I also shared the rationale behind the Adventist perspective on the Close of Probation. 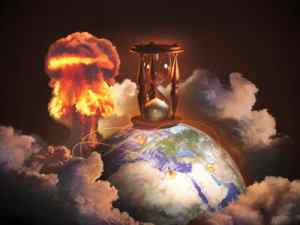 In this article I want to describe a better approach for sharing the Investigative Judgment with others. I will call it the Pyramid Approach.

Think for a second about the last time you gave a Bible study on the Investigative Judgment to someone without an Adventist background. Chances are you started with the prophecies of Daniel 7, 8 & 9, you then moved to the book of Hebrews and cross-referenced this with Leviticus, and finally, you introduced the idea of a pre-advent Investigative Judgment. Now there is nothing wrong with this approach in and of itself as it mimics the path that Adventists took to first discover the doctrine. But this approach opens the way for critics to create doubt regarding this doctrine on the grounds that the doctrine rests on too complicated a foundation. There are too many variables, any of which, if wrong, would allegedly cause the entire doctrine to collapse.

But in reality, as explained in the first article, this doctrine rests on much more solid a foundation than our critics insinuate: It rests on an Arminian understanding of the Protestant gospel. We believe that salvation is by grace through faith, and that human beings have free will both to accept Christ and to later reject Him, if they so choose. What distinguishes us from other Arminian denominations is the belief that people rest in their graves until the resurrection and, therefore, a judgment to differentiate between who remained in Christ and who did not, does not need to take place until right before the Second Coming.

So going with our pyramid analogy, the foundation of the pyramid is firmly established in Biblical Arminianism and Soul Sleep. When it comes to the timing of the Investigative Judgment, however, we have only established that it must take place some time shortly prior to the second coming. But before going to Daniel 8 to pinpoint the exact dates, as most Bible teachers often do, I recommend first determining a more general time frame for when this pre-Advent judgment should be expected. Is there any reason in Scripture to expect a judgment some time around 1844 besides the Daniel 8 passages? If so, this would constitute the second level of our pyramid. Thus, when the tip of the pyramid (the 2300 day prophecy) is set in place, it can rest on top of an already solid structure.

Consider with me that when the Bible is read chronologically, there is at every step a general expectation for the unfolding of the next set of events. Abraham expected that his descendants would live in a far country for some time. The Israelites in Egypt expected to return to Canaan some day. When captive in Babylon, the Hebrews expected that Jerusalem would be rebuilt. The people in Jesus’ time were expecting the Messiah to come. In the same way, the Christian church was also founded on a set of expectations. Before departing, Jesus promised to return one day and take His followers home. Unlike previous Bible promises, however, where these expectations were realized after a few generations at most, we have been waiting for Jesus’ promise for two millennia now. As rational beings, we have to ask ourselves if the Bible provides any sort of explanation regarding how much longer we can expect to wait. Is there any kind of timeline for Christ’s return, or is there a good chance we could still be waiting for Him 10,000 years from now? 50,000 years from now?

This isn’t some unimportant question we can just ignore or something we have no business asking, like some Christians insist. If all through the Bible God’s promises were fulfilled in a timely manner, thus giving the people of that time evidences on which to hang their faith, it stands to reason that there should be some explanation for why Christ’s promise has not seen fulfillment for so long. Especially is this the case in this era of scientific advancement when people have been taught to expect satisfactory evidence before being asked to believe something.

And the Bible does give us a general idea of God’s timeline even before consulting the prophetic passages. The apostle Paul explains in 2 Thessalonians that something needs to take place before Christ can return:

‘…we beseech you, brethren, by the coming of our Lord Jesus Christ, and by our gathering together unto him, that ye be not soon shaken in mind, or be troubled… as that the day of Christ is at hand. Let no man deceive you by any means: for that day shall not come, except there come a falling away first, and that man of sin be revealed, the son of perdition.’ 2 Thess. 2:1-3 KJV

The reign of the Antichrist is mentioned here as the delay factor – that thing which must take place before Jesus could return.

Now consider with me that in the books of Daniel and Revelation, there is one time period that appears seven different times (in various formats): 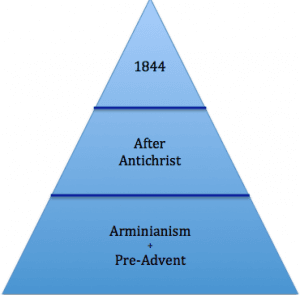 So it is evident that if we get nothing else out of Bible prophecy, this time period is definitely one thing that God wants us to understand. Nonetheless, the Christian world is virtually silent when it comes to providing a coherent explanation for what this time period means and why it is so important. Adventists, on the other hand, do have a very sound explanation for this time period and it becomes immediately evident why this period is important: it refers to the reign of the Antichrist which, even without specific dates, has to fall somewhere between 500 AD and 1800 AD. Anyone who disagrees with our interpretation is obligated to first provide a better explanation since it cannot be denied that God is going out of His way to bring this time period to our attention.

In summary, the foundation of our Investigative Judgement doctrine is firmly planted in Arminianism and Soul Sleep. This already tells us to expect the judgment some time prior to Christ’s coming. Paul tells us that the ‘man of sin’ or antichrist must come before Christ can return and Daniel/Revelation tell us his reign ends around the 1800’s. Thus, before ever opening Daniel chapter 8, we already have the general time frame when the Investigative Judgment must begin. And therefore, the chances are extremely high that we are also correct in our interpretation of the specific dates.