If there is a judgment going on in heaven right now and if, when Jesus comes, His reward is with Him, it stands to reason that at some point before the second coming, those who are alive on earth will have to be judged as well. And, in developing this idea Adventists have come to also understand that there will be a time when this judgment will be completed and probation will close. The concept of the Close of Probation however has tended to strike fear in many Adventists and has caused other Christians to view us with suspicion. But, as usual, it is because the concept is misunderstood. 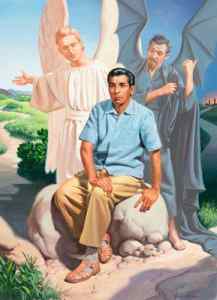 Unlike other Christians however, Seventh-day Adventists believe this event happens a short time before the Second Coming. And, many Adventists think this means that there will come a day when God will close the door of mercy and, even if they want to repent, God will no longer forgive them.

In chemistry, there are certain substances called catalysts which increase the rate of a chemical reaction. So if we mix together two substances and find that it normally takes several hours for the reaction to occur, adding a catalyst would reduce the time to several minutes instead.

Throughout every individual’s life, a decision is made whether or not to follow Christ. However, at any given time, you have three categories of people – those who chose Christ, those who rejected Christ, and those who are still on the fence. At some point, even those on the fence will make a decision, but, by then, more people will have been born and there will be a new generation of fence sitters.

Before the Second Coming, however, God wants every one to make a decision for or against Christ. He wants to eliminate the fence sitter group. And to do this, God introduces a catalyst. This catalyst is a combination of the church proclaiming and demonstrating a powerful last-day message while natural disasters, political and economic upheavals and other fear-inducing events are wide-spread. Through all these things God will speed up the decision-making process so that all will make up their minds as to whom they will serve.

Probation will not close to prevent people from changing their minds, but because people are no longer changing their minds. In other words, as a result of the catalyst, all will have made their decisions and there is no point in keeping probation open any longer.

Probation closes before the Second Coming and not at the Second Coming because God wants to allow time to pass so that it is evident to angels and unfallen beings that people have made up their minds and are no longer going to change. Some period of time passes where, as much reason as God gives people to repent, no one does any more. And then, heavenly beings all agree that there is no point in waiting any further, and it’s time for Jesus to return to take His people home.