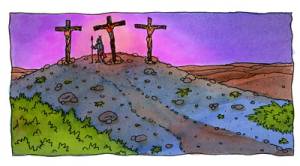 I believe those are some of the most profound, powerful and potentially life-changing words ever written, outside of the Bible. In a very clear and succinct way they explain the sacrifice Jesus made so that we could spend eternity with Him.

My question is, then, what stops most of us from completely accepting our already bought and paid-for salvation?

I think we tend to gloss over the “what we deserve” part. We jump right to the “what He deserves” part. We don’t spend much time considering what we actually deserve. We are surrounded by with messages that tell us that we deserve the good stuff – that we’ve earned it. Messages like “You deserve a break today,” “…because you deserve the very best,” and “go ahead, you’ve earned it.”

Even if we accept that “for all have sinned and fall short of the glory of God” (Romans 3:23), our human minds aren’t really capable, without the help of the Holy Spirit, of understanding the true weight of sin and what it actually cost Jesus to redeem us.

Sometimes we just take Christ’s sacrifice for granted. We kind of get to the point that we say or read the words without actually thinking about them any more. Paul describes it in Romans as drifting away.

“Therefore we must give the more earnest heed to the things we have heard, lest we drift away. For if the word spoken through angels proved steadfast, and every transgression and disobedience received a just reward, how shall we escape if we neglect so great a salvation, which at the first began to be spoken by the Lord, and was confirmed to us by those who heard Him,” Romans 2:1-3

Many years ago, I lived in Germany in an apartment that had several strikes against it – it was above a bar and the last building before the train tracks. Many of you will already know that trains in Europe are much more important for both carrying people and freight than they are in the United States. The German train system is really pretty spectacular, unless your bedroom window is three feet away from one of its busy tracks.

When I first moved in, I thought I would go insane! I woke up every time a train passed in the night and was often startled by them during the day. Add to that the bar/night club sounds from the floor below, and I really didn’t get much sleep at first.

But with an amazing quickness, I became deaf to all of those sounds. They didn’t wake me up at night or disturb me during the day. I almost forgot they were there. I think that sometimes, as Christians, we get just as deaf to the story of Jesus and what He’s done for us. Is it any wonder, then, that Mrs. White encourages us to spend time thinking about Him?

“It would be well for us to spend a thoughtful hour each day in contemplation of the life of Christ. We should take it point by point, and let the imagination grasp each scene, especially the closing ones. As we thus dwell upon His great sacrifice for us, our confidence in Him will be more constant, our love will be quickened, and we shall be more deeply imbued with His spirit. If we would be saved at last, we must learn the lesson of penitence and humiliation at the foot of the cross.” (E.G. White, The Desire of Ages, p. 83)

For several years the church I attend has done a large reenactment of the last week of Jesus life on the Saturday before Easter Sunday. It’s outside and the audience moves from place to place and watches different scenes … the Triumphal Entry of Jesus in Jerusalem, his interacting with the scribes and Pharisees, the Last Supper, the Garden of Gethsemane, His trial at the Sanhedrin and before Pontius Pilate, His crucifixion and resurrection.

Those who come to view the performance are reminded of the reality of Jesus’ last days. I have helped prepare the scene where Jesus stands before Pontius Pilate. Logistically it’s difficult because it’s one of the only scenes that requires make up and a costume change – the actor who portrays Jesus receives make-up so that he looks like he’s been beaten, and he needs to wear a robe and crown of thorns.

Emotionally, though, it is difficult because of the angry mob that calls for Jesus’ death. Being part of that mob is not something people want to do … it’s hard to find people who are willing to play those parts. The first couple of years I helped, I was part of the mob and I can hardly explain how deeply and profoundly I was affected.

The next day, as I replayed the scene in my mind, my heart was broken when I thought of what Jesus had borne for me – what Jesus had suffered in my place.

A devastating earthquake hit Iran in 2003. It was described as the deadliest earthquake in a decade, and it “filled the nation of Iran with sadness. But in the midst of despair, one story gave people hope. Cradled in her dead mother’s arms, surrounded by the crumbled remnant of a collapsed building, a baby girl was found alive.

“The mother shielded six-month-old Nassim from the falling debris and saved her life. Rescuers found the girl 37 hours after the earthquake.

“Hessamoddin Farrokhyar, Red Crescent public relations deputy director in Tehran, said: ‘She is alive because of her mother’s embrace. The baby girl is in good condition considering the circumstances.’

“Christ was ‘crushed for our iniquities’ (Isaiah 53:5, NIV). Those who take refuge in Jesus’ embrace are shielded from sin’s devastating impact, saved through his sacrifice.”1

Isaiah tells us that …

“He was despised and rejected — a man of sorrows, acquainted with deepest grief. We turned our backs on him and looked the other way. He was despised, and we did not care. Yet it was our weaknesses he carried; it was our sorrows that weighed him down. And we thought his troubles were a punishment from God, a punishment for his own sins! But he was pierced for our rebellion, crushed for our sins. He was beaten so we could be whole. He was whipped so we could be healed. All of us, like sheep, have strayed away. We have left God’s paths to follow our own. Yet the Lord laid on him the sins of us all.” Isaiah 53:3-6

We are the ones who put Him on that cross. Yet we are alive because of His embrace.