Verusca’s brothers had become Adventists and often talked about their new faith. Verusca knew that what her brothers told her was probably true, but she wanted no part of a church that didn’t allow dancing or drinking or other things that she enjoyed. But her brothers wouldn’t take a hint; they kept talking to her about their faith. 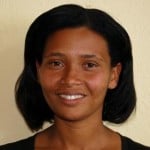 After several months of studying together, Marques asked Verusca to attend evangelistic meetings with him. Verusca declined. Marques invited her again and again, and still she refused. But finally she decided to go.

Verusca attended several of the meetings, but she resisted the calls to surrender her life to God. Then Verusca realized that she couldn’t run from God. She thought of how angry her mother had been when her brothers had become Adventists. What would happen when Mother learned that she, too, was thinking of becoming an Adventist?

“Where are you going?” she asked.

“Which church?” her mother asked.

“If you go, don’t come back!” her mother said angrily. Verusca’s courage failed, and she changed clothes and sat outside and cried. Her brother saw her and said softly, “Mom can’t save you; only God can.” Then he left.

Verusca’s mind was in turmoil. She recalled Bible texts Marques had read to her about leaving family to follow God. Her brother’s words, only God can save you, ran through her mind.

Verusca ran to her room, and dressed for church. As she walked out the door, her mother said, “Take your things, and don’t come back.”

Now what? Verusca asked herself. She had no money and no place to go if her mother turned her away. Her father wasn’t interested in religion and didn’t care what she did.