↓
Home→Daily→Introduction to Quarter: Feeding the Sheep 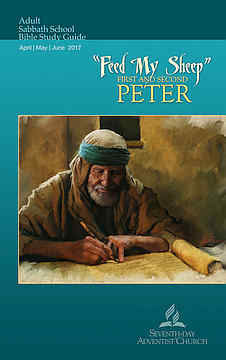 Because our study this quarter is on 1 Peter and 2 Peter, we are reading the words of someone who was with Jesus at most of the important moments in His ministry. Peter was also someone who had become a prominent leader among the earliest Christians. These facts alone would make his letters worth reading. But these letters take on added interest given that they were written to churches experiencing troubled times: they faced persecution from without and the danger of false teachers arising from within.

Peter warns that among the things that these false teachers will promote is doubt about the second coming of Jesus. “Where is the promise of his coming?” they will say, “for since the fathers fell asleep, all things continue as they were from the beginning of the creation” ( 2 Pet. 3:4 ). Today, almost two thousand years later, we know the reality of that charge, don’t we?

Besides Peter’s warning about false teachers, the suffering the churches experienced is a topic that he returns to several times. This suffering, he says, mirrors the sufferings of Jesus, who took our sins in His body when He died on the cross ( 1 Pet. 2:24 ). But the good news is that Jesus’ death brought nothing less than freedom from the eternal death caused by sin, as well as a life of righteousness here and now for those who trust in Him ( 1 Pet. 2:24 ).

Peter says that Jesus not only died for our sins but will return to earth and usher in the judgment of God ( 2 Pet. 3:10-12 ). He stresses the fact that the prospect of judgment should have significant practical implications in the life of the believer. When Jesus returns, He will destroy all sin and will cleanse the earth with fire ( 2 Pet. 3:7 ). Then Christians will receive the inheritance that God has been storing up for them in heaven ( 1 Pet. 1:4 ).

Peter has very practical words on how Christians should live. First and foremost, Christians should love each other ( 1 Pet. 4:8 ). He sums up his view by saying: “Finally, all of you, have unity of spirit, sympathy, love for one another, a tender heart, and a humble mind” ( 1 Pet. 3:8, NRSV).

Peter’s epistles are also a fervent proclamation of the gospel, the central message of the whole Bible. After all, if anyone should know the saving grace of the Lord, it is Peter. This same Peter, who so openly and crassly denied His Lord (even with cursing), saying, “‘I do not know the Man’” (Matt. 26:74, NKJV), is the same one to whom Jesus later said, “Feed my sheep” (John 21:17). These two epistles are examples of Peter’s doing just that?feeding the Lord’s sheep.

And, of course, any part of that feeding would include the great truth of salvation by faith in Christ, a theme that his fellow worker, the apostle Paul, so powerfully proclaimed. This is the truth of God’s grace. Peter knew about this, not just theoretically, or just as a doctrine, but because he had experienced the reality and power of that grace for himself.

As Martin Luther wrote in his commentary on Peter: “Consequently this Epistle of St. Peter is one of the grandest books of the New Testament, and it is the true, pure Gospel. For Peter does also the very same thing as Paul and all the Evangelists do in that he inculcates the true doctrine of faith, how Christ has been given to us, who takes away our sins and saves us.” Commentary on the Epistles of Peter and Jude (Grand Rapids: Kregel Publications, 1982), pages 2, 3.

Jesus told Peter to feed His sheep. We are among those sheep. Let’s get fed.

Robert K. McIver grew up in New Zealand and has worked most of his career at Avondale College, where he teaches Bible and archaeology. He is the author of several books, including The Four Faces of Jesus and Beyond the Da Vinci Code.