I have met a few people who have an image of Jesus in their minds, not based on Scripture, but on speculation. As a child I became interested in futball (soccer for U.S.A readers) and mentioned to my family that the game is so old Jesus may have played a form of futbal as a child. A matriarch in my family told me there was no way Jesus would ever play a game. I asked her why she said that. She said, “Jesus would never do anything to dishonor His Father!” I left it at that, but always wondered why she thought kicking a ball around with friends would be dishonoring to His Father? Her picture of Jesus was not based on Scripture, but on her imagination.

Some have an imaginary Jesus in their minds, nothing like the Jesus Peter knew. Some believe Jesus found doing the right thing quite easy since He was, after all, God. In their imagination perfection came easy for Him. It was no sweat. Really?

Luke told Theophilus that Peter was only about a stone’s throw away from Jesus, when,

And being in agony, He prayed more earnestly. Then His sweat became

like great drops of blood falling down to the ground. Luke 22:44 NKJV 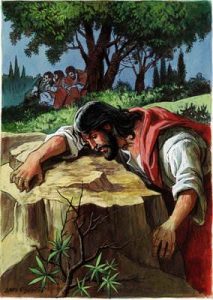 I don’t know if Gethsemane was a state park or not, but it was no walk in the park for the Son of God. There was nothing easy about His victory. He didn’t go back to heaven and tell the angels it was no sweat. He sweat drops of blood! Peter would not be familiar with the Jesus that many imagine in their heads. So when we go the throne of grace in Hebrews 4:15-16, we see that our high priest is touched with our human weakness as His victory came with sweat and tears! Later in Hebrews Paul tells us,

You have not yet resisted to bloodshed, striving against sin. Hebrews 12:4 NKJV

Paul is referring to Jesus sweating drops of blood to get His victory over self and sin.

Then He came to the disciples and found them sleeping, and said to Peter, “What! Could you not watch with Me one hour? Watch and pray, lest you enter into temptation. The spirit indeed is willing, but the flesh is weak.” Matthew 26:40-41 NKJV

Jesus showed and told Peter that he too must pray in order to overcome temptation. He acknowledged that Peter had a willing attitude, but his flesh was weak and needed to be strengthened through prayer. After vehemently promising to never deny Jesus, weary Peter would fall asleep again. And he ended up denying Jesus three times that -night. Did the Jesus Peter knew disown him?

How careful is the Lord Jesus to give no occasion for a soul to despair. How He fences about the soul from Satan’s fierce attacks. If through manifold temptations we are surprised or deceived into sin, He does not turn from us and leave us to perish. No, no, that is not our Saviour….-Ellen White, Our High Calling, Page 49

The Jesus Peter knew didn’t want Peter to despair, so at the resurrection the angel gave this message.

But go, tell His disciples—and Peter—that He is going before you into Galilee; there you will see Him, as He said to you.” Mark 16:7 NKJV

The Jesus Peter knew was the real Savior and did not want Peter to despair! He made sure Peter knew he was included even after failing three times in one night! The Jesus Peter found and fell in love with was perfect and yet so forgiving of others. Peter tells us how we can become like the Jesus he knew.

His divine power has given to us all things that pertain to life and godliness, through the knowledge of Him who called us by glory and virtue, by which have been given to us exceedingly great and precious promises, that through these you may be partakers of the divine nature, having escaped the corruption that is in the world through lust. 2 Peter 1:3-4 NKJV

Peter learned really quickly not to make his own promises any more, but, instead, to trust in Jesus’ exceedingly great and precious promises. While Jesus took on our humanity, Peter invites us to partake of Jesus’ divine nature. I have heard many arguments over just how human Jesus was. We saw in Gethsemane just how human He was, but Peter makes the debate of Jesus’ humanity unnecessary, when he tells us we can participate in Jesus’ divine nature, escaping the corruption in the world.

The Jesus Peter knew had to sweat to overcome. He sympathized with Peter’s struggles and weaknesses. He forgave Peter. When Peter’s promises failed, Jesus promised to share His divine nature with Peter so he too could overcome the corruption in the world. Peter has invited us to have faith in the same Jesus he had faith in.

To those who have obtained like precious faith with us by the righteousness of our God and Savior Jesus Christ. 2 Peter 1:1 NKJV