I’ve been doing some thinking about how things might look if more Christians were open to being filled and used by the Holy Spirit. Oh, I know, most of us believe that we are open and ready, maybe already being used by Him. And we’re probably right on some level, but not on a Moses-on-the-mountain, Day-of-Pentecost, turn-the-world-upside-down, being-filled-with-the-Holy-Spirit level. 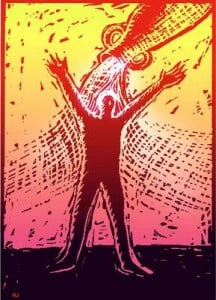 Those of us who live in “Western Civilization” like to imagine that our Christian experience is as having been baptized in the Holy Spirit, when in reality, most of the time, we have barely dipped our toes into the pool. We are comfortable in our polite, not too invasive or time consuming involvement with the Gospel.

That’s a problem, because it causes us to live in a bland, politically correct bubble which has inoculated us against a real relationship with Jesus. We get just enough that we think we’ve got it all. Our experience may be worse than someone who is just getting to know Jesus for the first time.

Jesus didn’t call us to be “safe,” or “polite.” He called us to follow Him and to bring as many folks along with us as possible.

“And Jesus came and spoke to them, saying, ‘All authority has been given to Me in heaven and on earth. Go therefore and make disciples of all the nations, baptizing them in the name of the Father and of the Son and of the Holy Spirit, teaching them to observe all things that I have commanded you; and lo, I am with you always, even to the end of the age.’ Amen.” Matthew 28:18-20

“The disciples were not to wait for the people to come to them; they were to carry the message to the people. Christ had imbued them with His power; He had laid upon them, His ministers, the sacred work of preaching the gospel of His grace which, from generation to generation, from age to age, would never lose its power. They were to go to the people with hearts softened by His grace. Their influence they were to regard as a sacred treasure. Christ’s work of personal ministry on earth was ended, and they, as His chosen ones, in the spirit of their Master, were to communicate to men the will of God.
“In their own lives they were to present to men Christ’s unselfish life of service. Knowing the requirements of God and the gospel of His grace, they were to consider it their sacred work to communicate this gospel in an ever-enlarging experience. As Christ’s ambassadors they were to improve every opportunity to seek for the lost.” (E.G. White, Manuscript Releases, Volume 13, page 47)

Many of us want to be an ambassador for Jesus, but we don’t want to draw too much attention to ourselves. I don’t believe that’s possible. If we accept the position, we are going to have to be willing to be different – different enough for people to look at us and see Jesus, different enough that we might make some people (and ourselves) uncomfortable.

Think about how different Moses was after he had been with God on Mt. Sinai. The glory of God shone out of his face and people we so uncomfortable with it that they asked him to wear a veil. The apostles, at Pentecost, looked different after the Holy Spirit was poured out on them – so different that people thought they were drunk. It’s not possible to be that close to God and not be changed by His presence.

Beyond looking different, those who have completely surrendered to being used by God act differently. They aren’t worried that somebody might think they’re weird, or that somebody night not agree with what they say. They do and say what is necessary to bring as many people as possible into a saving relationship with Jesus Christ. In the ‘60s and ‘70s, we might have called folks like that “Jesus freaks,” and they made many of us more than just a little bit uncomfortable.

Think about this, as we move toward Jesus’ second coming, He has given us a job to do – we are to make the gospel available to every corner of the world – to everybody, everywhere. That is an impossible task, without the Holy Spirit. It can’t be done by throwing money at it, by strength of will, or by legislating it. It can only be done when the people of God completely, and without reservation, surrender to the use of the Holy Spirit.

So, what’s keeping us (me) from taking that last step? Well, I don’t want to look different; I’m afraid God will ask me to do something I’m afraid to do; I’m afraid I might have to leave my comfortable life; I’m afraid some people might not like me.

All of those things will most certainly happen. Moses did not want to go back to Egypt and stand before Pharaoh; Gideon didn’t want to lead an army (especially a small one); Noah probably didn’t want to spend so much of his life building a huge boat and preaching to people who laughed at him every day; Shadrach, Meshach and Abednego probably would have preferred to stay unnoticed and out of the King’s cross hairs, but every one of them allowed God to use them for His glory, to be a tool in His hand to lead others to Him.

Before Pentecost, the idea of spreading the Gospel to the whole world seemed impossible to the apostles, but after that, those few people turned the world upside down – nothing has ever been the same since.

Now it’s time for us to turn the world Jesus-side up so that when He returns as many people as possible will be ready. To do that, we have to walk so close to Jesus that we look more like Him than we look like the people around us. We have to remember that whatever He asks us to do, He will equip us to do it. We have to remember that, no matter what, His grace will be enough for us.

“And He said to me, ‘My grace is sufficient for you, for My strength is made perfect in weakness.’ Therefore most gladly I will rather boast in my infirmities, that the power of Christ may rest upon me. Therefore I take pleasure in infirmities, in reproaches, in needs, in persecutions, in distresses, for Christ’s sake. For when I am weak, then I am strong.” 2 Corinthians 12:9-10

“The work will be similar to that of the day of Pentecost. As the ‘former rain’ was given, in the outpouring of the Holy Spirit at the opening of the gospel, to cause the upspringing of the precious seed, so the ‘latter rain’ will be given at its close, for the ripening of the harvest. …The great work of the gospel is not to close with less manifestation of the power of God than marked its opening. The prophecies which were fulfilled in the outpouring of the former rain at the opening of the gospel, are again to be fulfilled in the latter rain at its close.
“…Servants of God, with their faces lighted up and shining with holy consecration, will hasten from place to place to proclaim the message from Heaven. By thousands of voices, all over the earth, the warning will be given. Miracles will be wrought, the sick will be healed, and signs and wonders will follow the believers. Satan also works with lying wonders, even bringing down fire from heaven in the sight of men. [Revelation 13:13.] Thus the inhabitants of the earth will be brought to take their stand.” (E.G. White, The Great Controversy, p.612)

Are we ready to take our stand? to turn the world Jesus-side up? We don’t have much time.