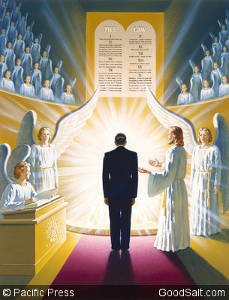 Some Adventists feel apologetic about the “investigative judgment,” and others have come to deny it altogether. But an investigation of professed believers is clearly taught in the parable of the wedding feast (Matthew 22:1-3). A study of the Hebrew sanctuary services tells us that the Day of Atonement was a time of judgment in which those professing to be Israelites were affirmed as members of the covenant community or excluded because of rebellion. And from these, as well as Revelation 4-6, Daniel 7-9, we get our understanding of the investigative judgment. 1

Even our understanding of our place in history is based on the prophecies in Daniel 7-9. The “seal” of that prophecy, to quote the angel expositor to Daniel, was the ministry of Jesus Christ as the “Anointed One” (Daniel 9:25-26). He is a historical figure that we can date to a close margin of error. That’s why we know that the date of October 1844 is accurate. So far removed from the Biblical context, we didn’t understand it prior to 1844 and many still do not understand it.

Why are we the only ones teaching the historicist method of prophetic interpretation? We really aren’t the only ones. but we do appear to be in the minority. It is a testament to the astounding success of the Counter-reformation that the other two non-biblical (contrary to the angel’s exegesis) interpretations dominate non-Adventist Christian thought.

Part of the difficulty we face in understanding the concept of an investigative judgment is that we are so far removed from the Biblical context. We are surprisingly ignorant of the significance of the New Moon Festivals that culminated in the Day of Atonement. We have a “modern” idea of judgment that is unrelated to Biblical understanding of judgment.

If God were a benevolent tyrant (an oxymoron), He would only need an instant in time to decide everyone’s fate — past, present and future. (This is, in part, the kind of personage Satan has made God out to be.) The truth is far more interesting. When we read the first chapter of Job and realize that Adam is called a son of God (being that Adam had no biological father) we can begin to understand that we are not alone in the universe — contrary to popular Christian beliefs.

When Satan presented himself as the representative of this earth (in Adam’s place), he was doing so among all the other representatives of other ‘solar systems’ who were participating in God’s chosen form of government. These ‘sons of God’ were also present at the creation of the earth. (See Job 38:6,7) Understanding this gives much more significance to God’s challenge to Satan regarding Job’s righteousness.

Consider that God is answering Satan’s charges against Him in how He deals with us. Consider also that there are beings who will someday call us neighbors who are concerned about who we really are. Daniel talks about judgment thrones (plural) and Revelation talks about twenty-four elders. Consider all the lives of the past millennia and God’s individual interventions on behalf of His people to review for the benefit of the “jury,” and you begin to understand the time-frame.

When Jesus comes, He says He will have His reward for His faithful servants with Him. Revelation teaches a millennium of judgment. It also speaks of a resurrection of the condemned. We might think of this as the sentencing phase of the judgment, when the wicked will be confronted with their record, accept the verdict and then face the consequences of their choices.

But on a personal level, let us embrace judgment in the biblical sense. 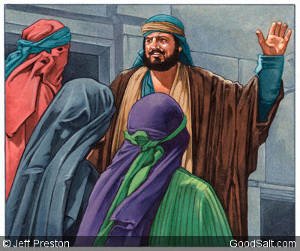 The Israelite New Moon festivals were about family, then clan, then tribe, then national reconciliation — ultimately leading to reconciliation with God on the Day of Atonement. We are currently in a period of time where we are invited to reconcile with our brothers and sisters and with Christ and find joy in the love of Christ that flows out through all who are In-Him. The Day of Atonement greeting among Israelites was roughly translated, “May you be sealed!” Now that should be heavy with meaning for us today! 2

When we consider Satan’s fate, we need to consider that he turned in rebellion from God from within His presence. There was nothing more God could do to reveal His character to Him so that He might draw Him into His love. For the mighty angel who rebelled there is no turning back. Ellen White speaks to this specifically and the Bible hints at it.

Satan will see his rebellion through to the burning end with a determination fallen humans cannot fathom. This is not about being denied opportunities, it is about spurning God’s love until there is nothing left within you to respond. Among humans this is referred to as the unpardonable sin.

May you be sealed!