I spent some time looking for a good example of atonement, this week. It was more difficult than I expected because so many of the examples I found equate atonement with forgiveness – synonyms. I have to admit, that I have thought of them as the same as well. But when I look at the description of the things that happened on the Day of Atonement, there’s something more going on there above and beyond forgiveness. 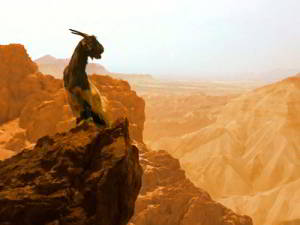 See, all the rest of the year (and even throughout the Day of Atonement) sacrifices were happening to forgive individuals of their individual sins – a person would bring his lamb to the tabernacle, lay his hand on the head of the lamb and confess his sin, kill the lamb and then the priest would carry the blood of that sacrifice into the Holy Place. Symbolically then, that’s where the sin of that person stayed, until the Day of Atonement. On that day, the High Priest would offer a sacrifice to effect forgiveness for his own sins, and then he would do something very different. He would take two goats, present them both to the Lord at the entrance to the Tabernacle and then draw lots to tell which goat would be the Lord’s goat (the sin offering) and which one would be the scapegoat.

“Then he shall kill the goat of the sin offering, which is for the people, bring its blood inside the veil … and sprinkle it on the mercy seat and before the mercy seat. So he shall make atonement for the Holy Place, because of the uncleanness of the children of Israel, and because of their transgressions, for all their sins; and so he shall do for the tabernacle of meeting which remains among them in the midst of their uncleanness. There shall be no man in the tabernacle of meeting when he goes in to make atonement in the Holy Place, until he comes out, that he may make atonement for himself, for his household, and for all the assembly of Israel. And he shall go out to the altar that is before the Lord, and make atonement for it, and shall take some of the blood of the bull and some of the blood of the goat, and put it on the horns of the altar all around. Then he shall sprinkle some of the blood on it with his finger seven times, cleanse it, and consecrate it from the uncleanness of the children of Israel. “And when he has made an end of atoning for the Holy Place, the tabernacle of meeting, and the altar, he shall bring the live goat. Aaron shall lay both his hands on the head of the live goat, confess over it all the iniquities of the children of Israel, and all their transgressions, concerning all their sins, putting them on the head of the goat, and shall send it away into the wilderness by the hand of a suitable man. The goat shall bear on itself all their iniquities to an uninhabited land; and he shall release the goat in the wilderness.” Leviticus 16:15-22

What I learned this week is that the goat that becomes the Lord’s goat has not had any sins confessed over it and no hands laid upon it, so it is “sinless.” That way its blood symbolically cleanses away all of the sins that have been piling up in the sanctuary all year long. Then all of those sins are confessed over the scapegoat, who is not killed but led out into the wilderness never to be seen again – essentially carrying with it all of those sins that had been in the sanctuary. So now, the sanctuary is cleansed of those sins for another year. Atonement is not about forgiveness because those sins were already forgiven when the individual made his sacrifice. Atonement is something more. It’s erasing the evidence of those sins. Here’s an example of what I’m trying to say from a book called, Temptations Men Face by Tom Eisenmann.

“Several years ago I heard Bob Sheffield of the Navigators tell a moving story … Before he became a Christian, Bob played professional hockey in Canada. He was tough, loved to fight, and found himself in jail one night after a barroom brawl. Later, Bob and his wife became Christians. They…accepted a temporary assignment with The Navigators…in the States.

“Bob had to apply for landed immigrant status, which would allow him and his wife to continue in ministry in the United States. But because he had a criminal record, his request was denied…. They decided to apply in Canada for what is called the ‘Queen’s Pardon.’ Following thorough investigation, the pardon was granted. Bob Sheffield received the following notice in the mail:

“Whereas we have since been implored on behalf of the said Robert Jones Sheffield to extend a pardon to him in respect to the convictions against him, and whereas the solicitor general here submitted a report to us, now know ye therefore, having taken these things into consideration, that we are willing to extend the royal clemency on him, the said Robert J. Sheffield. We have pardoned, remitted, and released him of every penalty to which he was liable in pursuance thereof.

“On any document from that time forward on which Bob was asked if he had a criminal record, he could honestly answer no. The pardon meant he was released from any possible punishment for the crimes, and the record of the crimes themselves was completely erased.

That is the kind of pardon we have in Jesus Christ. We are set free from any penalty or punishment. When asked, the answer is, ‘no record, pardoned by the blood of Christ.’1

So, since Adam and Eve believed the serpent’s lie and sinned in the Garden of Eden, the sins that Jesus died to forgive have been piling up in the heavenly sanctuary. But since 1844, Jesus has been going through the heavenly sanctuary and putting those sins right where they belong, on the head of Satan. Then during the thousand years when we’re in heaven, Satan will be wandering this empty earth, carrying the ultimate blame for all the sins in the entire history of the world. What that means for each of us who have given our hearts to Jesus is, when our name is called and our file taken before the great Judge, instead of being so big it has to be brought in by the truckload, it contains one pristinely blank page to which God adds a giant WELCOME HOME stamp.

You and I only have one responsibility in this process – accept Christ’s sacrifice to cover our sin. I do – do you?