As a second grader walking home from school with a couple of other boys, for some reason I cannot explain, I thought it would be a good idea to throw some rocks at a car parked near a house. The lady in the house ran outside and demanded that I go get my mother and tell her what I did and come back there. I was surprised this lady “knew” my mother, but since she did I had no choice but to get her. It took several decades for me to finally realize I fell for this lady’s bluff, as my mother had never seen her before. That night I felt terrible for what I had done, and asked my dad to pray with me. He prayed a simple prayer, 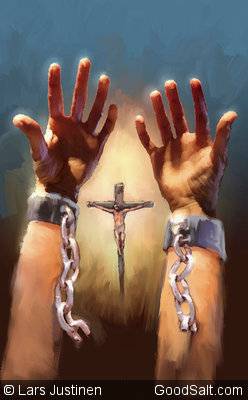 “If we confess our sins, you are faithful and just to forgive us our sins and to cleanse us from all unrighteousness.” (1 John 1:9)

Wow was it that easy? By claiming that Bible promise I experienced both forgiveness and a cleansing from my foolishness earlier that afternoon. The promise of 1 John 1:9 cleared and cleansed me of all guilt, and I have never since thrown a rock at a car.

So what happened that moment I claimed 1 John 1:9? Justification? Sanctification? Both? Before we get all hung up on labels and jargon, let’s consider,

Many commit the error of trying to define minutely the fine points of distinction between justification and sanctification. Into the definitions of these two terms they often bring their own ideas and speculations. Why try to be more minute than is Inspiration on the vital question of righteousness by faith? (Ellen White, Christ Triumphant, p. 150)

I was only a second grader, and while I had not studied words like “justification” and “sanctification,” I did know that I was forgiven, and that as far as God was concerned it had never happened. I remember getting up off my knees and watching my father go back to his regular routine as if it had never happened. He never spoke of it again. The lady never did either. If it existed at all, it only existed in my mind.

This forgiveness was amazing, but I also knew Jesus died on the cross to forgive me, and that I did not want to break His heart again by doing something so foolish! Since then I have read and studied more about forgiveness and justification and sanctification. While I have a better understanding then when I was in the second grade, and have never thrown a rock at another car, I have also experienced all too often what Ellen White described in Steps to Christ, p. 64.

We shall often have to bow down and weep at the feet of Jesus because of our shortcomings and mistakes, but we are not to be discouraged. Even if we are overcome by the enemy, we are not cast off, not forsaken and rejected of God. No; Christ is at the right hand of God, who also maketh intercession for us. Said the beloved John, “These things write I unto you, that ye sin not. And if any man sin, we have an advocate with the Father, Jesus Christ the righteous.” 1 John 2:1.

For if when we were enemies we were reconciled to God through the death of His Son, much more, having been reconciled, we shall be saved by His life. (Romans 5:10 NLT)

I am not only justified by Christ’s death but also by His life. His life stands in the place of my life. Again justification is “me in Jesus.” This is my title to heaven and my deliverance from the penalty of sin. I may not be perfect, but the moment I sense my heart need of Jesus to forgive my guilt, mine is the kingdom of heaven.

Blessed are the poor in spirit, For theirs is the kingdom of heaven. (Matthew 5:3)

So to recap, justification is “me in Jesus.” It is my title to heaven and the deliverance from the penalty of sin. But it is not God’s will that I enter heaven as a barely pardoned criminal.

The plan of redemption is not merely a way of escape from the penalty of transgression, but through it the sinner is forgiven his sins, and will be finally received into heaven − not as a forgiven culprit pardoned and released from captivity … but welcomed as a child, and taken back into fullest confidence. (Ellen White, S.D.A. Bible Commentary, Vol. 7, p. 950)

In the prayer I prayed with my dad that afternoon, I asked Jesus to come into my heart. This process leads us to sanctification which is “Jesus in me.” The book of Ephesians is an excellent book to help us understand the gospel. The first half is about justification, “me in Jesus.” Ephesians 1:6 tells me I am accepted “in the beloved,” and Ephesians 2:6 tells me I am sitting in heavenly places “in Christ Jesus.”

Midway through the book Paul explains sanctification, which is “Jesus in me.” Ephesians 3:17 tells me that Jesus dwells in my heart by faith, and Ephesians 3:19 tells that me I am filled with all the fullness of God! Paul then goes on and tells us Christians how to walk “worthy of the vocation in which we have been called.” So in the first half part of  Ephesians I have justification.

That does not mean that it takes a lifetime to become “sanctified.” Sanctification is a process, rather than a goal. It is progressive throughout my lifetime. I may have done perfect math when I was in the 2nd grade, but when I got to the sixth grade more was expected and I had to keep growing. What was considered perfection in the second grade was nowhere close to perfection in the sixth.

And as we live in God, our love grows more perfect. So we will not be afraid on the day of judgment, but we can face him with confidence because we live like Jesus here in this world. (1 John 4:17 NLT)

What needs perfecting is my love. A legalistic record of every deed of my life will not help me perfect my love.

The character is revealed, not by occasional good deeds and occasional misdeeds, but by the tendency of the habitual words and acts. (Ellen White, Steps to Christ, p. 57)

True sanctification comes through the working out of the principle of love. “God is love; and he that dwelleth in love dwelleth in God, and God in him” 1 John 4:16 (Ellen White, Reflecting Christ, p. 81)

David did not throw a rock at a car. He slept with someone else’s wife and killed her husband! in Psalms 51:1-19 David experiences true repentance, justification, and sanctification. We don’t see David going back making the same mistakes over and over, thank God! As I read Psalms 51, I believe David’s heart was truly broken, and he was motivated by the principle of love instead of selfish pride. Still, I want to leave with a thought from Psalms 51:17 NLT

You will not reject a broken and repentant heart, O God.

Friend, if you have found yourself failing again and again, let me share something with you. While I totally believe God can and will free you from any sin and also believe there is no excuse for sin, I also believe Psalms 51:17 does not describe a one-time offer. God will not reject a broken heart, no matter how many times sin has already broken that heart.

Lord, if you kept a record of our sins, who, O Lord, could ever survive? But you offer forgiveness, that we might learn to fear you. Psalms 130:3-4 NLT