As Adventists we believe that in the last days there will be a showdown between spiritual Babylon and those who have the seal of God, who reflect the character of Jesus. While Daniel had his haters, it amazes me how he seemed to thrive and even found favor among the leaders of Babylon and Persia. Daniel was not one to compromise his standards. The life of Daniel shows us that it is possible to live a life of uncompromising integrity and still get along with those of different beliefs and lifestyles. Years later Paul wrote,

For the grace of God has been revealed, bringing salvation to all people. And we are instructed to turn from godless living and sinful pleasures. We should live in this evil world with wisdom, righteousness, and devotion to God, Titus 2:11-12 NLT

We can’t wait for heaven to live a righteous life. God’s grace empowers us to reflect Christ’s character in this evil world. Daniel is an example of how we can be like Jesus in the midst of corruption. Let’s take a look.

Then Daniel went in to see Arioch, whom the king had ordered to execute the wise men of Babylon. Daniel said to him, “Don’t kill the wise men. Take me to the king, and I will tell him the meaning of his dream.” Daniel 2:24 NLT 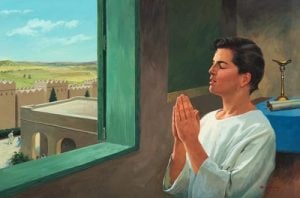 When Daniel received the vision the king had dreamed his first thought was to save the lives of the wicked wise men. Jesus always put the salvation of others first, and so did Daniel. The wise men in Daniel’s day were preserved by the integrity of Daniel. In Genesis 12;3 God said all the families of the earth (not just believers) would be blessed by the Messiah. Likewise even the unbelievers of Daniel’s day were blessed by Daniel’s integrity. In the last days I believe men and women of God will be a blessing to the evil world around them.

I marvel at Daniel’s humility.  In Daniel 1:20, Daniel and his friends were found to be ten times wiser than the other wise men, but look at what Daniel says when he tells the king his dream.

And it is not because I am wiser than anyone else that I know the secret of your dream, but because God wants you to understand what was in your heart. Daniel 2:30 NLT

“I tell you the truth, the Son can do nothing by himself. John 5:19 NLT

Look at what Jesus says about others who believe.

I tell you the truth, anyone who believes in me will do the same works I have done, and even greater works, because I am going to be with the Father. John 14:12 NLT

Daniel lived a life of uncompromising integrity in the midst of Babylon and Persia. Amidst his haters he more than survived, he thrived and found favor even among wicked rulers. Some blame corruption in the workplace for being passed over for promotions, but God promoted Daniel right in the heart of all the corruption. God can promote you too anytime anywhere. Jesus lived a life of uncompromising integrity in the heart of the Roman Empire and a corrupt religious system.  He too had His haters but He too found favor “with both God and man” and was able to tell His Father,

I brought glory to you here on earth by completing the work you gave me to do. John 17:4