Several years ago, a teenage girl who had several tragedies in her immediate family, started visiting our church with her parents. She was still trying to figure out who God was and who she was. Other kids started making remarks about her blue hair and strange wardrobe, so she declared she was not coming back to  church. She went to the atrium, where she sat on a bench to sulk. Soon an elderly traditional and conservative elder came and sat beside her. Now you wouldn’t think an old man in a traditionally stuffy suit would have a chance to reach the heart of a teenage girl with blue hair, now would you? But this old man was from Vietnam and came to the United States as a teenage boy. He too was made fun of because of his cultural differences and even because of his religion. He explained to this young girl that he did not let people making fun of him stop him from coming to church, and told her not to let people making fun of her stop her either. So on that bench you had an elderly Vietnamese man in a stuffy grey suit, sitting next to an American teenage girl with blue hair as they talked about all the things they had in common, and thus a friendship was forged. 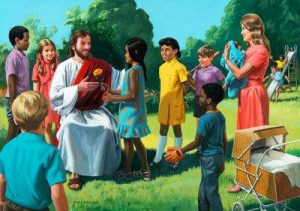 Years later when the elderly man died, at the funeral the mother shared with me how much he meant to her daughter. Even though her daughter was all grown now and living in a different area she would still mention his name affectionately. He was her forever friend who helped her find God as her Forever Friend. The best way to make a forever friend for God is to be a forever friend. We show people how God loves them by the way that we love them.

Unfortunately there have been missed opportunities in the church to make or be a forever friend.

Years before ever becoming, or even thinking about becoming a Bible Worker myself, I found myself on a church softball team, captained by the new local Bible Worker. I failed to eat breakfast before running off to play. Not too bright. In the middle of the game, I began to get dizzy and lightheaded. My team was up to bat when I pretty much blacked out. I was sitting right next to the Bible Worker and told him, as the batter was striking out, “I am blacking out. I can’t even see anything right now.” His reply? He threw my mitt in my lap and said, “That’s the third out. Let’s go take the field!” Not exactly the reply I was expecting. Needless to say, I did not go out onto the field. I managed to get myself to a nearby building where I got a drink and lay down until my sight came back.

I had heard people who had been studying with this Bible Worker say how wonderful he was. I guess already having been baptized, I was not a potential “notch on his belt,” so he was not that wonderful to me. He never even missed me when I failed to come back to the game. I never heard from him again. At this point in my life, I was not really that familiar with the Bible Worker concept. My church never had one before. Therefore I had never really considered becoming one, but on my way home that day, I remember thinking to myself, that if I ever did become a Bible Worker, I would not be like that one! I also told myself that if I genuinely care about people who are about to be baptized, then I would genuinely care about people who have already been or will never be baptized too. So, years later when I became a Bible Worker, I told myself that, as well as being theologically sound, I also want to be relationally sound. I decided to be a genuine caring friend, as well as someone who taught theology.

I was studying with a man, in the first district I had been assigned as a Bible Worker, when he showed up to church with his 14-year-old step-daughter. She had never been to any church before. I went up to the parents of teenage girls in the church, and told them, a young girl is here who has never been to church before. Please have your daughters greet her and befriend her. One parent, who had two teen girls, shrugged her shoulders and said, “My daughters already have friends.” I could not believe what I heard. The other girls did not befriend her. Her step-father eventually went to another nearby Adventist church where he got baptized. I do not know the fate of his step-daughter.

Later in another district, I was studying with a war veteran who needed a ride to the veteran’s hospital one day. Wanting to connect him with members of my church, I called several retired members and asked them to give this worthy veteran a ride. One person told me they were unavailable because, “That’s the day I water my garden.” And that was the most legitimate excuse! Not only did this veteran never come to my church, but that was also the end of our Bible studies. Do you blame him?

After studying a few months with a young married couple, they became baptized and joined my church of mostly older people. One of the older elders never reached out to this young couple, until finally he heard them say something in Sabbath School that was not theologically correct, so he took it upon himself to call them later in the day, to “reach out” and tell them that they were wrong! That was the only contact he had with them, and it was not long before they were out of the church. How long would you stay in a church whose elder only called you to tell you that you were wrong?

In Texas I studied with a teenage boy, that for sake of anonymity, I will call Scott. He found a ride to church every Sabbath, as no one else in his family came to church. Shortly after his baptism he moved to Tampa Florida. We had a going-away party for him, and I wrote in a card, “Bible Workers come and go, but friends are forever.” I did not think that much about it. Eight years later I also happened to move to Tampa Florida. One day, shortly after moving to Tampa, I ran across his name in my address book, and the address “Tampa Florida” jumped out at me. I had forgotten this was exactly where he moved to years earlier. I called the number, to find out that he was in jail. I arranged a visit. Not exactly the reunion I had planned with a former Bible student, huh? We were glad to see each other and had a lot to talk about since our last visit. He explained to me what had been going on with him lately and how ended up in jail. Towards the end of our visit, he told me, “When I moved away, you wrote in my card, Bible Workers come and go but friends are forever. I never forgot what you wrote, and now that you have come to see me after all those years, even though I am in jail, shows me you meant what you said.” I realized even more, that being relational is just as important as being theologically sound. I realized too, that even though he had been baptized eight years ago, my work with him was not through. Scott needed a forever friend. I am glad God moved me across the country to where I could reach out to him.

As a Bible Worker my goal goes way beyond seeing people get baptized. My goal is to see them in heaven. That means being a forever friend to those who are preparing for baptism, and to those who have already been baptized, as well as to those who I may never see get baptized. Some people think they can’t do Bible work and give Bible studies. Believe me, if I can, anybody can. Even so, what a young teenage girl needed in a small church long ago, was not a Bible Worker but a friend. A veteran just needed a ride to the hospital. A young couple needed someone from the church, to call them just to say hello, instead of just to tell them they were wrong. A young man sitting in jail needed to know someone still cared, even though he was less than perfect.

Bible workers or pastors may get people baptized, but in order to see them all the way into the Kingdom, it takes more than a Bible Worker. It takes a forever friend. Will you be that forever friend?

Those who are wise will shine as bright as the sky, and those who lead many to righteousness will shine like the stars forever. Daniel 12:3 NLT

You may click here for the video presentation of this article.