↓
Home→Beliefs About Salvation→Growing in Christ - Fundamental Belief 11→Bible Study→Are We Marked by Time With Jesus?

“Study to shew thyself approved unto God, a workman that needeth not to be ashamed, rightly dividing the word of truth.” 2 Timothy 2:15

True confession time – I don’t know how to study. I know how to look stuff up and to read things … but I just don’t get the whole concept of “studying” something. Once I’ve read it, I don’t really know what else to do. 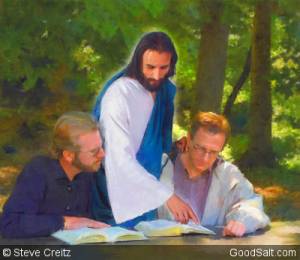 That’s become kind of a frustration for me when it comes to studying the Bible. Give me a passage to read and I can read it, no sweat. But reading isn’t the same as studying. Imagine going to a banquet and all you do is look at and sniff all the food – that’s not the same as actually eating the food. You can describe the food, but it hasn’t become part of you.

Now, I’m thinking, I’m probably not alone in my study-impaired state. When January rolls around, we’re all set to start reading through our Bibles in a year, following the Bible Reading plan du jour. The problem is, after a few short weeks, we’ve fallen so far behind in our reading that we finally just give up. But even if we kept up with that, we’re just reading; that’s not studying! And besides all that, studying is hard, and boring, and it takes time I don’t have, and I don’t know how.

“But you must continue in the things which you have learned and been assured of, knowing from whom you have learned them, and that from childhood you have known the Holy Scriptures, which are able to make you wise for salvation through faith which is in Christ Jesus.
“All Scripture is given by inspiration of God, and is profitable for doctrine, for reproof, for correction, for instruction in righteousness, that the man of God may be complete, thoroughly equipped for every good work.” 2 Timothy 3:14-17.

In 2 Timothy 2:15, Paul tells us that to be approved by God and to be able to understand the word of truth, we have to study scripture.

That’s pretty clear, isn’t it? But, again, once I’ve read through it, I’m not sure what to do with it. How do I make the leap from just reading, to becoming equipped for “every good work?”

Well, I just read about “Inductive Bible Study” and I realized as I read through the steps, that I’d actually done it before, I just didn’t know the name. And it’s not hard or boring. In fact, it’s kind of fun!

I lived in Germany for a couple of years and during that time I spent Sabbath afternoons at the Servicemen’s Center in Frankfurt. It was run by the most amazing couple, the Bowens. They always had something planned for Sabbath afternoon so that everybody didn’t just drift off and sleep all afternoon. One of the activities that I really enjoyed turned out to be “Inductive Bible Study.”

There are three steps involved in this method: Observation, Interpretation and Personalization. Sounds fancy, doesn’t it? But it’s not anything you haven’t done on your own probably many times without knowing it.

That’s just the initial reading of a certain passage. We have to make sure we understand what the writer is actually trying to tell us. What are the setting and the circumstances and how are they important to the story?

One of Mrs. Bowen’s favorite stories for this process with the feeding of the five thousand. We’d all sit around the living room and we would talk about what had happened just before this miracle and how that might have affected what was going on. She asked questions like, “Why was Jesus in that particular place on that day?” “Why were the people there?”

Then we would move onto Interpretation. After we’d discussed the story for a few minutes, she’d have someone read the passage again and then she’d have us sit quietly for several minutes and imagine ourselves in that place and time. Mrs. Bowen would tell us to pick a character in the story and imagine ourselves as that character. It could be one of the main people in the story or you could invent a character for yourself. The important thing was to imagine ourselves in the story. What would we be seeing, hearing, tasting, and smelling? How would the character we picked feel and react in the setting? Mrs. Bowen would ask for someone from the group to take a couple of minutes and share who the character they picked was, why they were in that particular setting that day and what happened to them while they were there.

First, imagining your own character’s thoughts and feelings really helped each of us understand the story a little bit better. Then, listening and sharing with the other folks in the room expanded our understanding and broadened our perspective of the story itself.

Personalization is the last step is the process. We called it “debriefing,” but it was the same thing. Mrs. Bowen would have us go back around the room and we would each describe what we had learned from the exercise and how we could use what we’d learned in the next week.

Who knew studying the Bible could be so fun! It was a great way to spend a Sabbath afternoon and to learn more about Jesus. Most important of all, we took away an experience with Jesus that most of us still remember.

Studying the Bible does several things for us. It helps us to be more settled in the truth so that when the enemy tries to deceive us, we’re less likely to fall for his lies. We will have filled our hearts and minds with the truth. Another benefit is that we get a clearer picture of Jesus and who He really is.

Admittedly we can’t always do the exercise with a room full of people, but even if you do it alone, the Word of God has become part of you and has changed you for the better in some way.

Craig Brian Larson, editor of Preaching Today, relates an experience that demonstrates how we can be changed through studying the Word of God.

“Over our office lunch recently I visited with a fellow employee named Cindy and learned that her father taught music at Wheaton College and also coordinated its Artist Series. Those positions allowed him the privilege to meet celebrated musicians who were to perform at the College.

“George Szell, legendary music director of the Cleveland Orchestra, was one of the musical celebrities Cindy met while in her early teen years. Cindy’s father introduced her to Szell and pointed out that she played the viola.

“Ever the taskmaster, the visiting maestro put his fingers under her chin and lifted to see the left side of her jaw. ‘It doesn’t look like she practices much,’ Szell said, making a serious point in a playful manner.

“As violinists and viola players know, the more you practice, the more the skin under the jaw where the violin is held is darkened. Disciplined, hard work leaves its mark.”1

In the time of the apostles, people took note that they had been with Jesus. (Acts 4:13) When someone looks at me, can they tell that I spend time with Jesus? Can they see the mark of my time with Him? I hope so.