↓
Home→Daily→Monday: The Call to Worship

Read Daniel 3:8-15 and Revelation 13:11-18. What parallels can we see between what happens in Daniel’s time and what will happen in the future?

The image of gold standing on the plain of Dura, whose name in Akkadian means “walled place”, gives the impression of a vast sanctuary. As if it were not enough, the furnace nearby can well evoke an altar. 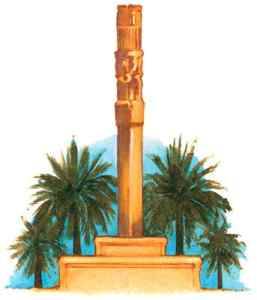 Babylonian music is to be part of the liturgy. Seven types of musical instruments are listed, as if to convey the completeness and effectiveness of the adoration protocol.

Today, we are bombarded from every side by calls to adopt new lifestyles, new ideologies, and to abandon our commitment to the authority of God as expressed in His Word and to surrender our allegiance to contemporary successors of the Babylonian empire. The allure of the world at times seems overwhelming, but we should remind ourselves that our ultimate allegiance belongs to the Creator God.

According to the prophetic calendar, we are living in the last days of earth’s history. Revelation 13 announces that the inhabitants of the earth will be called to worship the image of the beast. That entity will cause “all, both small and great, rich and poor, free and slave, to receive a mark on their right hand or on their foreheads” (Rev. 13:16, NKJV).

Six categories of people are said to give allegiance to the image of the beast: “small and great, rich and poor, free and slave”. The number of the beast, which is 666, also emphasizes six. This shows that the image erected by Nebuchadnezzar is just an illustration of what the eschatological Babylon will do in the last days (see Dan. 3:1 for the imagery of six and sixty). Therefore, we do well to pay close attention to what transpires in this narrative and how God sovereignly directs the affairs of the world.