It was Thursday night. After the Last Supper, Jesus and the disciples went toward the Mount of Olives. On their way to Gethsemane, Jesus stopped and prayed for Himself, for His disciples, and for all who later would believe in Him through the apostles’ preaching. Although the agony of the Cross was before Him, His greatest concern was not for Himself but for His followers. John 17 presents Jesus’ longest intercessory prayer recorded in the Bible. It is encouraging to think that He prayed for everyone who believes in Him, including each of us. 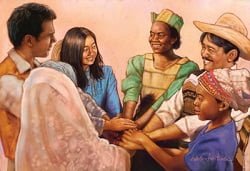 Read John 17. What was Jesus’ main prayer request to the Father regarding the believers? See especially John 17:21-23.

Unity is crucial for the life of the church. We can measure its importance by the fact that four times Christ repeated His eager desire that His followers may be one (John 17:11, 21-23). In that special final hour, the Lord could have prayed for many other very significant and necessary things. Instead, He focused His prayer on the unity of the believers. He knew that the greatest danger for the church would be a spirit of rivalry and division.

Jesus’ plea is not for uniformity but rather for a personal unity similar to His relationship with the Father. He and the Father are two persons, distinct from each other, with different functions. Yet, they are one in nature and purpose. By the same token, we all have different temperaments, backgrounds, abilities, and roles, but we all should be united in Jesus Christ.

This kind of unity does not happen spontaneously. In order to have it, we must fully accept Christ’s lordship in our lives. He must mold our character, and we must surrender our will to His will.

This unity is not an end in itself. It is a testimony to inspire the world to believe in Christ as the Savior sent by the Father. Harmony and union among men of diverse dispositions is the strongest witness possible that God has sent His Son to save sinners. It is an unquestionable evidence of Christ’s saving and transforming power. And we have the privilege of bearing this witness.

Many times unity is threatened by nothing other than selfishness. How can we make sure that we are not guilty of jeopardizing unity for no good reason?