↓
Home→Daily→Monday: The Plot Against Daniel

Read Daniel 6:6-9. What is the thinking behind this decree? How does it play on the king’s vanity?

Darius may appear silly in promulgating a decree that he soon wishes to repeal. He falls into the trap laid by the officers, who are smart enough to play with the political circumstances of the recently established kingdom. 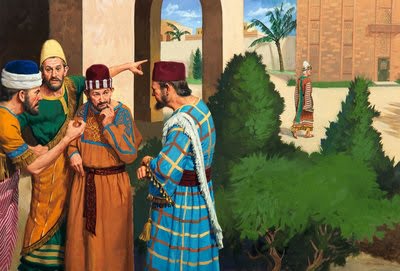 Darius has decentralized the government and established one hundred and twenty satraps in order to make the administration more efficient. However, such action entails some risks in the long run. An influential governor can easily foster a rebellion and split the kingdom. Thus, a law forcing everyone to petition only to the king for thirty days seems a good strategy to foster allegiance to the king and, thus, prevent any kind of sedition. But the officers mislead the king by claiming that such a proposal has the support of “all” the governors, administrators, satraps, counselors, and advisors — an obvious inaccuracy, since Daniel is not included. In addition, the prospect of being treated as a god may have been appealing to the king.

There is no evidence that Persian kings ever claimed divine status. Nevertheless, the decree may have been intended to make the king the sole representative of the gods for thirty days; that is, prayers to the gods have to be offered through him. Unfortunately, the king does not investigate the motivations behind the proposal. Thus, he fails to perceive that the law that would allegedly prevent conspiracy was itself a conspiracy to hurt Daniel.

Two aspects of this law deserve attention. First, the penalty for transgression is to be cast into the lions’ den. Since this kind of punishment is not attested elsewhere, it may have been an ad hoc suggestion of Daniel’s enemies. Ancient Near Eastern monarchs placed lions in cages in order to release them on certain occasions for hunting. So there was no shortage of lions to maul whoever dared to violate the king’s decree. Second, the decree cannot be changed. The unchangeable nature of the “law of the Persians and Medes” is also mentioned in Esther 1:19 and Esther 8:8. Diodorus Siculus, an ancient Greek historian, mentions an occasion when Darius III (not to be confused with the Darius mentioned in Daniel) changed his mind but could no longer repeal a death sentence he had passed on an innocent man.