↓
Home→Daily→Monday: Riot in the Temple

Having accepted the church leaders’ suggestion, Paul would need to undergo a seven-day ritual purification to assist the completion of the men’s vow (Num. 19:11-13). At the same time, Jewish tradition stipulated that any person coming from Gentile lands would be unclean and so unable to enter the temple. This is why Paul had to purify himself before going to the priests to give notice of his purification process related to the Nazirites (Acts 21:26).

Read Acts 21:27-36. What happened to Paul at the end of his seven-day period of purification? 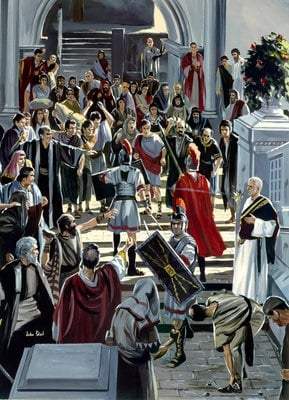 A riot ensued, caused by those who stirred up the crowd against Paul, accusing him of attacking the most sacred symbols of Jewish religion, in particular of having desecrated the temple. As one of Paul’s travel companions was a Gentile believer from Ephesus named Trophimus (Acts 21:29), they thought the apostle had introduced him into the temple’s inner court, where only Jews could enter. If the accusation were legitimate, Paul would be guilty of a most serious offense. Along the wall that separated the outer from the inner court, there were signs in Greek and Latin warning Gentile visitors not to enter farther in, otherwise they would be personally responsible for their ensuing death.

“By the Jewish law it was a crime punishable with death for an uncircumcised person to enter the inner courts of the sacred edifice. Paul had been seen in the city in company with Trophimus, an Ephesian, and it was conjectured that he had brought him into the temple. This he had not done; and being himself a Jew, his act in entering the temple was no violation of the law. But though the charge was wholly false, it served to arouse the popular prejudice. As the cry was taken up and borne through the temple courts, the throngs gathered there were thrown into wild excitement.”—Ellen G. White, The Acts of the Apostles, p. 407.

When the news of the riot reached a Roman fortress, the Roman commander, Claudius Lysias (Acts 21:31-32; Acts 23:26), came with troops and rescued Paul before the crowd could kill him.

As the target of the attacks, Paul was arrested and bound with chains while the commander tried to inquire about what was going on. At the hysteric shouting of the crowd, he ordered the apostle to be taken to the fortress.