Lack of sleep and exhaustion due to physical overexertion are real problems. More troubling, however, is when we feel that we are running on “emotional empty.” And, of course, when lack of sleep is added to emotional trials, we can become painfully discouraged.

Baruch, Jeremiah’s scribe, must have felt like that often during the last turbulent years of Jerusalem, prior to the chaos, suffering, and havoc that would follow the city’s destruction by the Babylonians. 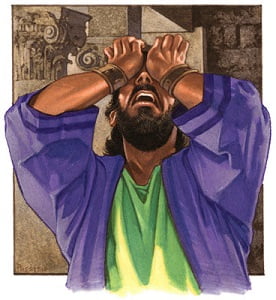 Can you imagine what it would feel like if God would send a custom-made message to you personally? Baruch received a message straight from God’s throne room ( Jeremiah 45.2-3 represents a good summary of how people feel when they are running on empty.

From all that we know from Scripture about this period, it’s clear that Baruch’s complaints were not superficial wails. He had good reasons to feel discouraged and emotionally worn out. A lot of bad things were happening, and more were to come.

How does God respond to Baruch’s aches and pains? Read  Jeremiah 45.4-5.

God’s response to Baruch’s real pain reminds us of the fact that God’s despair and pain must have been exponentially so much bigger than Baruch’s. He had built Jerusalem; He was about to tear it down; He had planted Israel as a vineyard (Isaiah 5:1-7); He was about to uproot it and carry it into exile. This was not what the Lord had wanted for His people, but it had to come because of their rebellion against Him.

But there was light at the end of the tunnel for Baruch. God would preserve Baruch’s life — even in the midst of destruction, exile, and loss.