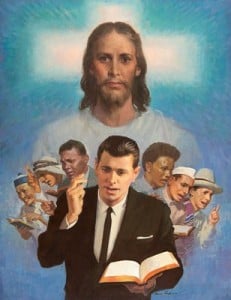 And this gospel of the kingdom will be preached in all the world as a witness to all the nations, and then the end will come. Matthew 24:14 NKJV

While working as a Bible Worker and lay pastor in a small church in west Texas, several of the members told me they hoped I would stay there forever, because they could not survive without me. I was young and stupid enough to believe them. However, the church membership more than doubled – not while I was there – but after I left! And, the people who came in after I left were not people with whom I had studied. They were people who never heard of me and didn’t know I existed.

While taking the gospel and the salvation of souls seriously, I have learned not to take myself so seriously. I can still rejoice even when someone rejects me because I know I presented them with an opportunity to make a choice. While I want everyone to choose Jesus, I know not everyone will.

Whatever else happens, once the gospel has gone into all the world, and that last decision has been made for or against Jesus then He will come. Every decision for or against Jesus is one decision closer to the second coming. This is why it is important to spread the gospel even if people do not accept it. Either way we hasten the Second Coming by just being the “angel” 1 that takes the gospel to every nation, kindred, tongue and people, allowing people the opportunity to choose. So don’t be too disheartened when your missionary project does not yield the results you hoped for. It was successful in giving people an opportunity to choose either way.

But we are just that. An opportunity. Not The opportunity. Let’s not take ourselves so seriously. People can reject us and still accept Jesus. What people think about me is  trivial in the scheme of the great controversy. So don’t lose heart or take slights and rejections to heart. Just because someone says No to me, does not mean they will say No to the next person God sends. There is still hope.

After leaving Texas and working in Florida as a Bible Worker for a few years, a pastor friend from Texas called me. He asked how many baptisms my church had so far. I told him 90, with 48 of those being in the current year.

“And how many of those were from your work?” He asked.

Yup. After a church in Texas more than doubling its membership AFTER I left, I finally learned a thing or two.