Nehemiah chapter 13 begins with a concern about Ammonite and Moabite foreigners/idolaters in their midst (Neh. 13:1-3). These verses do not speak about driving away individuals from a different nation or race who followed God, but rather they refer to sending away those who were of a different faith — not converts, but idolaters. (See also Deut. 23:3-6). 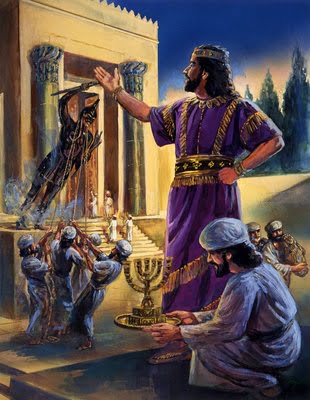 Both Eliashib and Tobiah are known figures in the book of Nehemiah. Eliashib was the high priest of the nation, and he was also in charge of the temple. Tobiah is mentioned as the Ammonite enemy of Nehemiah who vehemently opposed his work in Jerusalem. The alliance of Eliashib and Tobiah suggests a relationship established through marriage.

Even though records of the marriage connection have not been preserved, we know that Tobiah had a Jewish name (meaning the “Lord is good”), and thus most likely came from a Jewish background. His wife’s family, the descendants of Arah, though unidentified, are believed to have been related to Eliashib’s family. Additionally, Sanballat the Horonite, Nehemiah’s other opponent, had a daughter who was married to Eliashib’s grandson. Therefore, the circle of intrigue around Nehemiah must have been intense as the highest-ranked officials in the land were related and in an alliance against Nehemiah’s leadership.

During the governor’s absence, the high priest gave Tobiah one of the rooms in the temple that was designated to hold the tithe, gifts, and offerings. Tobiah was granted permanent residence in the temple, a way of establishing him as one of the leaders of the nation. The enemies of Nehemiah finally achieved what they wanted all along: to displace Nehemiah and be in charge themselves. Fortunately, Nehemiah wasn’t going to sit by and do nothing.