↓
Home→Tags From Babylon to Jerusalem 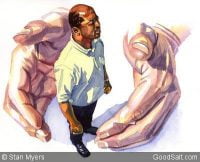 In the movie Black Hawk Down, the U.S. colonel was trying to rescue his men who who had been ambushed by gun fire while trying to intervene in the civil war in Somalia. He had Humvees picking up the dead and wounded all around. After loading a Humvee with several wounded soldiers, he told a … END_OF_DOCUMENT_TOKEN_TO_BE_REPLACED