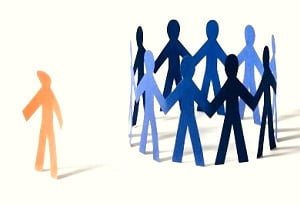 “I wrote to you in my letter not to associate with sexually immoral people—not at all meaning the people of this world who are immoral, or the greedy and swindlers, or idolaters. In that case you would have to leave this world.” 1 Corinthians 5:9-10, NIV

The problem of how the church should relate to the world has existed from the beginning and has continuously struggled for resolution. Two conflicting viewpoints are illustrative regarding this tension. On the one hand, the world can be seen as intrinsically evil and therefore to be avoided at all costs. This may be interpreted as avoiding all intercourse with those who are not included in the elite fellowship of the “saved.” This can be seen in a passive form when we see church members who, perhaps not deliberately, have only fellow church members in their circle of friends. Other passive segregations might occur when a person only engages in church related activities. These individuals are often the most appreciative of a church that has a full social calendar with many opportunities to bury themselves in a never-ending round of social and volunteer engagements each year.

More aggressive forms of segregation are sometimes seen in calls to only patronize “Christian” businesses, maybe even restricting doing business selectively to those of one’s own denomination. Aggressive segregators may openly attack other Christians who see things differently, chastising them for joining with non-Christians in holiday celebrations, attending secular entertainment venues, or even observing or participating in competitive athletic events. Some of the more extreme segregators may even advocate for the exclusion of such “compromising” individuals from church fellowship altogether.

In contrast to this worldview, we find others who see the world as a fertile field with crops that need harvesting. (See Luke 10:2) These individuals, far from segregating themselves from contact with the world, wade right out into those murky waters, sometimes chest deep, looking for every opportunity to let their light shine where those needing to find the Lighthouse can see it. If the lost are chasing Easter bunnies or hanging up Christmas stockings, these Christians will be right there with them, using the opportunities to share about the Resurrection or the Nativity. If the lost are enjoying a new hit song on their music player, these Christians will be right there enjoying it with them, perhaps sharing a hit by Casting Crowns or The Newsboys or inviting them to a contemporary Christian concert. Many of us have even seen some of this type of Christian at sporting events holding up signs that say “John 3:16.”  In short, they are quick to seize every opportunity to let their light shine. Like Paul counseled Timothy, they seek to “Preach the word; be prepared in season and out of season…” 2 Timothy 4:2, NIV

However, even Paul struggled with the tension between these two world views. Paul was raised a Pharisee. (See Acts 23:6) As such, he inherited much of their segregationist world view. Pharisees tended to focus on those things that placed a wall of separation between God’s people and the rest of the world. (See Acts 15:5) We can see this in some of Paul’s harsher statements regarding women, sinners, and those who disagreed with him. (See 1 Corinthians 11:5-6, 1 Corinthians 5:5, and Galatians 5:12) But Paul was also a Pharisee in transition. He struggled mightily to develop an inclusive theology that went beyond anything he would have learned as a Pharisee. In his second epistle to the Corinthians, he was very concerned that he might have gone too far in what he had written in 1 Corinthians 5:5. He grew beyond the stark black and white of the Pharisees exclusiveness and judgmentalism and began to lay a solid foundation for an inclusive theology. The same Paul who made such harsh statements about others also wrote, “There is neither Jew nor Gentile, neither slave nor free, nor is there male and female, for you are all one in Christ Jesus.” Galatians 3:28, NIV

These two world views often result in two very different theologies. The exclusive view sees God as impotent to protect and save His people. He is the God of the church and not the world. They perhaps feel that as long as one remains within the confines of safe fellowship, God will protect them. However, should they stray from that segregated community, their safety is forfeit and God will abandon them to whatever unknown agent of the Devil is lurking without. This limited concept of God is often seen in history even among those who do not worship Him. When the armies of Damascus under Ben-Hadad attacked King Ahab in Samaria and were defeated, they felt it was because the God of the Jews was a hill god. They attacked again in the plain. Of course their limited view of God’s power was erroneous, and they were defeated there as well.

This limited view of God’s abilities has no room for a God who accompanies us through the “valley of the shadow of death.” (Psalm 23:4) Instead, this theology would have asked King David, “What are you doing in that valley in the first place?” This theology might believe that angels will not accompany a soul into a movie theatre or, even worse, a tavern. A logical outcome of this way of thinking might be that if the angels abandon souls to these places, who are we to do otherwise? Besides, we will probably be lost ourselves since God has a limited ability to protect us.

An alternative theology based on the inclusive world view sees God’s ability and power as limitless to protect His saints. They see a God who even gives them special spiritual protection to accomplish the work of reaching the lost. (See Ephesians 6) They see a God who can give a small boy on the enemy’s ground the power to bring down giants that would destroy him. (See 1 Samuel 17) When David brought down Goliath with a stone, he courageously rushed onto the battlefield knowing that God was in charge. Those who have this theology can go after souls even on Satan’s battlefield knowing that God is well able to protect them and grant victory.

Some might ask, “Why go into such places? Why can’t we just let our light shine out from the church and draw people there?” Perhaps it is like the quote often attributed to Willie Sutton, the famous bank robber. As the saw goes, when he was asked why he robbed banks, he replied “Because that’s where the money is.” Perhaps the reason to venture out from the church onto dangerous ground is because that’s where the lost souls are. Some might feel that this is a “new” theology, but it is not.

When Moses was safe in Midian, God called him to go back to Egypt and brave all the dangers there to free the Israelites. He could have told God that he would build a sanctuary in Midian and any who escaped from Egypt would find safety there. But it was not God’s purpose to save a few who might escape on their own. He wanted to offer freedom to everyone enslaved and oppressed. There was no other way to do this than to go where the slaves were. Surely, Moses knew that Pharaoh might want to take his life, but he had come to understand that God’s ability to protect is limitless. For that reason, he could stand on the shore of the sea with a panicked multitude and Pharaoh’s army bearing down upon them and say to the trembling crowd, “The Lord will fight for you; you need only to be still.” Exodus 14:14, NIV

Perhaps Christianity often has more form than power because they have lost sight of God’s willingness and ability to protect them. While we may have become more interested in keeping the house clean than in going out into the dirt and mire of the world, have we forgotten that cleanliness depends on God’s gift and not our constant scrubbing and dusting? God’s cleansing can happen only within our hearts, no matter how pristine we may make things appear to be on the surface. Since God is ready and willing to cleanse us, we should not fear exposure to the dirt we find “out there.” It should not be an excuse to remain uninvolved.

The 19th century theologian William Shedd once stated “Ships are safe in the harbor, but that’s not what ships are made for.” We might also say that Christians may feel they are safe within the fellowship of the church, but that’s not what Christians are made for. We must abandon the safe harbor and go forth in search of souls hungry for salvation. If we become a little soiled as we seek the lost, that dirt should lead us to our knees for cleansing. Just like a ship gathers barnacles and must come into dry dock from time to time to have its hull scraped clean, we will need to come to God from time to time to get our hulls scraped as well. But when we do, the Shipmaster will be smiling and saying “Well done, good and faithful servant!” Matthew 25:21, NIV