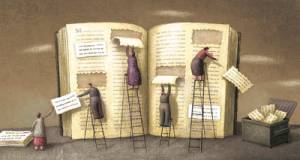 Once upon a time, the world happened, possibly with the help of some Higher Being. Finally, men and women came along. They began to worship the Higher Being and to tell and to write down stories about It (the Higher Being). In some of the stories, the Higher Being was called God. One of the stories described how some of the people thought God created the world and all the animals and people in six days. Another story was about a flood that God sent when the people weren’t paying enough attention to Him. After that the stories were about lots of people who tried to do the right things to make God happy but they kept messing up so He gave them a set of rules that they had to follow. There are stories about wars and people who were good and people who were not. The people wrote some poems to God. Some people wrote about things they said God told them were going to happen in the future.

After a long time, a baby named Jesus was born and he grew up and was a good man. He made some of the people who believed in God so angry that they killed him. But some people thought he was sent by God and they worshiped him and wrote about the things Jesus said and did while he was on Earth. Finally the people wrote a book about how God would get revenge on all the people who didn’t follow His rules. The End.

I just found out that Thomas Jefferson actually put together his own version of the Gospels. He called it, The Life and Morals of Jesus of Nazareth. This is how he did it: He took six bibles – two in English, two in French and two that were in Greek and Latin. Then he actually cut passages out of the Gospels and pasted them back in another book, in chronological order. He put the same passages in English, French, Latin and Greek next to each other so he could compare them.

The final book, called The Jefferson Bible, is 86 pages long and is still around. The Smithsonian bought it from Jefferson’s great-granddaughter in 1895 for the huge sum of $400.

Jefferson even changed the grammar at one point.

What was Jefferson really trying to do though? The same thing people have been trying to do since not long after the Fall. He was trying to take the “Godness” out of God.

If God is just a social construct (something that humans made up) and Jesus was just a really good guy, then we don’t have to believe in anything hard like a real six-day creation, a catastrophic flood, a virgin birth, or a resurrection. If we can look at the Bible as a compilation of some really good stories that teach some good lessons, then we don’t have to believe anything that makes us uncomfortable like the Ten Commandments or a final accounting for the way we’ve lived our lives.

We don’t have to be changed by a relationship with the God who made us … because, “if we admit that He made us,” as a friend of mine said, “we have to admit that He can tell us what to do – He has a right to be interested/involved in our lives.” That makes a whole lot of people really uncomfortable.

The truth is, whether we like it or not – whether we can understand it or not, the Bible is true. God created the world in six days and rested on the Sabbath. If we discount the Genesis account of Creation, then what’s to stop us from discounting any other part of the Bible that we can’t understand? And, once we start cutting and pasting only the parts we can understand, we’ll find that we’ve cut out God. After that, there’s nothing left.

“God is the foundation of everything. All true science is in harmony with his works; all true education leads to obedience to his government. Science opens new wonders to our view; she soars high, and explores new depths; but she brings nothing from her research that conflicts with divine revelation. Ignorance may seek to support false views of God by appeals to science; but the book of nature and the written word shed light upon each other. We are thus led to adore the Creator, and to have an intelligent trust in his word.” E.G. White, Christian Education, p 196
In the beginning [before all time] was the Word (Christ), and the Word was with God, and the Word was God Himself. He was present originally with God. All things were made and came into existence through Him; and without Him was not even one thing made that has come into being. In Him was Life, and the Life was the Light of men. And the Light shines on in the darkness, for the darkness has never overpowered it [put it out or absorbed it or appropriated it, and is unreceptive to it]. John 1:1-5