↓
Home→Feature→The Word of God in Action in the Flesh

Three weeks ago I was writing about how our community service centers provide practical ways for us to worship God, and serve the community. Currently, I have a group Bible study with several of our friends in the Homosassa Florida community, while they wait to get their food at the Homosassa Seventh-day Adventist Church’s food pantry on the first and third Tuesdays of each month. Not everyone who comes for food chooses to join my Bible study, and that is totally okay. But you know what? They all get a Bible study anyway. When they meet our community service volunteers, who are full of Jesus’ grace they are seeing God’s Word in action in the flesh.

And the Word became flesh and dwelt among us, and we beheld His glory, the glory as of the only begotten of the Father, full of grace and truth. John 1:14 NKJV

Every place where Jesus spread grace and truth He was spreading the Word of God. He was the Word of God in action in the flesh. I believe I can say, that when people meet our community service volunteers it is like meeting Jesus. Paul says that by having the love of Christ, we too can be filled with all the fulness of God.

to know the love of Christ which passes knowledge; that you may be filled with all the fullness of God. Ephesians 3:19 NKJV

Satan wanted to have God’s power but he did not want to have God’s self-sacrificing love and character. Of course we cannot be God. That is not what Paul is saying. Paul is saying that we can be filled with God’s love and self-sacrificing character. When we are emptied of self, and filled with the grace and truth of Jesus, our works themselves will be the Word of God in action in the flesh.

Most assuredly, I say to you, he who believes in Me, the works that I do he will do also; and greater works than these he will do, because I go to My Father. John 14:12 NKJV

Of course Jesus is talking about being empty of self in this life so we can have eternal life. I believe Dorcas is the perfect illustration of Jesus’ teaching on this point. Keep in mind, In the New Testament no mention is every made of a priest or elder be raised back to life, but we do see a selfless community service leader who was totally empty of self raised back to life. 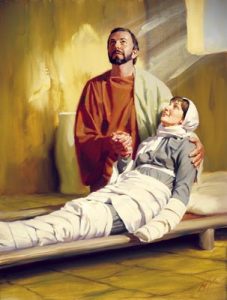 At Joppa there was a certain disciple named Tabitha, which is translated Dorcas. This woman was full of good works and charitable deeds which she did.  But it happened in those days that she became sick and died. When they had washed her, they laid her in an upper room.  And since Lydda was near Joppa, and the disciples had heard that Peter was there, they sent two men to him, imploring him not to delay in coming to them.  Then Peter arose and went with them. When he had come, they brought him to the upper room. And all the widows stood by him weeping, showing the tunics and garments which Dorcas had made while she was with them.  But Peter put them all out, and knelt down and prayed. And turning to the body he said, “Tabitha, arise.” And she opened her eyes, and when she saw Peter she sat up.  Then he gave her his hand and lifted her up; and when he had called the saints and widows, he presented her alive. Acts 9:36-41 NKJV

I know we are not saved by works. I realize many a hard worker has died at an early age. Still, I wonder if Dorcas was such a wise steward of her time and blessed so many people in the community, demonstrating God’s Word in action in the flesh, that God felt it necessary to extend her life? High priests, apostles, pastors and head elders have never been raised from the dead yet, but God raised a humble community services center worker back to life. That tells me community services workers have a very special place in God’s heart! Thank you to all of you who minister to the community at your local Seventh-day Adventist Community Service Centers!