Far from being dependent upon ancient pagan creation myths, Genesis seems to have been written in a way that refutes those myths and distances God as Creator from them.

Read Genesis 1:14-19. How are the entities that appear on the fourth day described, and what are their functions? 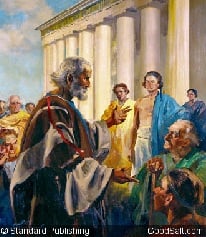 The terms “sun” and “moon” were surely avoided because their names in Hebrew were the names of (or closely related to the names) the sun and moon gods of the ancient Near East and Egypt. The use of the terms “greater light” and “lesser light” showed that they were created for specific functions, “for signs and seasons, and for days and years” and to “give light on the earth” (Gen. 1:14-15, NKJV). That is, the text shows very clearly that the sun and moon were not gods but created objects with specific natural functions, much as we understand them today.

Read Genesis 2:7, Genesis 2:18-24. How is God intimately involved in the creation of Adam and Eve?

The ancient Near Eastern myths unanimously depict man’s creation as an afterthought, resulting from an attempt to relieve the gods of hard labor. This mythical notion is contradicted by the biblical idea that man is to rule the world as God’s vice regent. Nothing in the creation of humans was an afterthought. If anything, the text points to them as the climax of the creation account, showing even more starkly how different the pagan and biblical accounts really are.

Genesis, thus, presents a corrective against the myths of the ancient world. Moses used certain terms and ideas incompatible with pagan concepts. And he did this by simply expressing the biblical understanding of reality, and of God’s role and purpose in Creation.