↓
Home→Daily→Wednesday: The Coming of the Son of Man

As the judgment unfolds, a most important figure enters the scene: the Son of Man. Who is He? First, the Son of Man appears as an individual heavenly figure. But as the title implies, He also displays human traits. In other words, 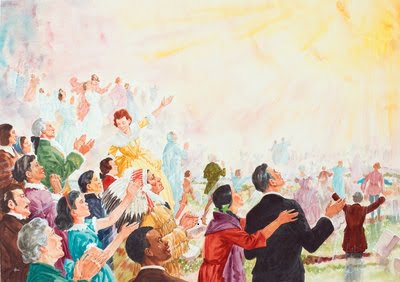 He is a divine-human individual who comes to play an active role in judgment. Second, the Son of man coming with the clouds of heaven is a common image of the Second Coming in the New Testament. However, in Daniel 7:13 specifically, the Son of man is not depicted as coming from heaven to earth, but as moving horizontally from one place in heaven to another in order to appear before the Ancient of days. Third, the depiction of the Son of man coming with the clouds of heaven suggests a visible manifestation of the Lord. But this imagery is also reminiscent of the high priest who, surrounded by a cloud of incense, enters the Most Holy Place on the Day of Atonement to perform the purification of the sanctuary.

The Son of man is also a royal figure. He receives “dominion and glory and a kingdom” and “all peoples, nations, and languages should serve Him” (Dan. 7:14, NKJV). The verb “serve” can also be translated as “worship”. It appears nine times in chapters 1-7 (Dan. 3:12, Dan. 3:14, Dan. 3:17-18, Dan. 3:28; Dan. 6:16, Dan. 6:20; Dan. 7:14, Dan. 7:27) and conveys the idea of paying homage to a deity. So, as a consequence of the attempt to change the law of God, the religious system represented by the little horn corrupts the worship due to God. The judgment portrayed here shows that true worship is eventually restored. The worship system set by the papal system, among other elements, places a fallen human being as a mediator between God and humanity. Daniel shows that the only mediator capable of representing humanity before God is the Son of Man. As the Bible says, “For there is one God and one Mediator between God and men, the Man Christ Jesus” (1 Tim. 2:5, NKJV).