Read Daniel 5:13-28. What is the reason Daniel gives for the soon-to-come demise of this king?

Forced by the circumstances, the king resorts to consulting Daniel, but he seems to do so with reluctance. This may tell more about the attitude of the king toward the God of Daniel than toward Daniel himself. 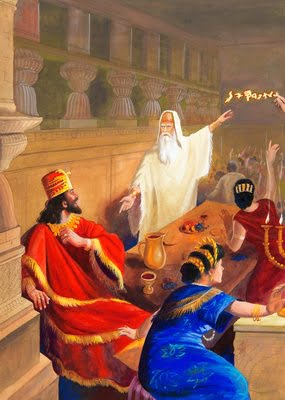 In turn, Daniel’s response to the king’s offer of reward says a lot about Daniel’s priorities and character. It is also likely that Daniel, knowing the meaning of the mysterious words, realizes just how worthless the reward really is.

Daniel then indicts the king on three counts.

First, Belshazzar totally has ignored the experience of Nebuchadnezzar. Otherwise he would have repented and humiliated himself like his predecessor.

Second, Belshazzar has used the temple vessels in order to drink wine and to praise his idols. Here Daniel mentions the six kinds of materials used to make idols in the same order noted previously.

Third, the king has neglected to glorify God, the One “who holds your breath in His hand and owns all your ways” (Dan. 5:23, NKJV).

Having addressed the failures of the king, Daniel proceeds to the interpretation. Now we learn that the divine graffiti consists of three Aramaic verbs (with the first repeated). Their basic meaning should have been known to the king and his sages: MENE: “counted”; TEKEL: “weighed”, and PERES: “divided”.

With the Medo-Persian army at the gates of Babylon, the king and the sages must have suspected some ominous meaning in that writing, but the sages do not dare to say something unpleasant to the king. Only Daniel proves capable of decoding the actual message into a meaningful statement in order to convey its full meaning to Belshazzar: “MENE: God has numbered your kingdom, and finished it; TEKEL: You have been weighed in the balances, and found wanting; PERES: Your kingdom has been divided, and given to the Medes and Persians” (Dan. 5:26-28, NKJV).

Not exactly words of comfort and cheer.