A couple of years ago I had the privilege of conducting my “In Light of the Cross” gospel seminar in New England. While there, a kind and gracious member of the Adventist Church I was speaking in, gave me a tour of the region and several old New England churches. Being a history buff, and realizing that the religious awakening, which spawned the Advent movement began in New England, created in my heart a deep appreciation for these old churches, some built in the early 1700’s or before. 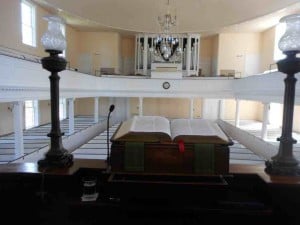 I walked into one sanctuary, built in 1732,and sat on a pew deep in thought, contemplating the hundreds of people who had sat in that sanctuary over the last 280 years! I admired the pulpit from where the gospel was preached to weary sinners for centuries. Yes, I realize these churches were not Adventist churches, but they still preached the cross to sinners, and I imagine over the centuries many a sin weary pilgrim has laid his burden down on the altar and taken up the cross of Jesus. For that I am very thankful for these churches of various denominations. Each of these churches of various denominations were fulfilling the prophecy of Jesus that,

..this gospel of the kingdom shall be preached in all the world, in [into] witnessing to all folks; and then the end shall come. Matthew 24:14 WYC (In my previous posts I often used the NLT Bible translation. However, writing about old churches and the religious awakening has me in a Wycliffe version frame of mind.)

For Christ sent me not to baptize, but to preach the gospel; not in wisdom of word, that the cross of Christ be not voided away. 1 Corinthians 1:17 WYC

Protestant churches rose out of the dark ages with the light of the gospel. John Wycliffe is remembered as “the morning star of the reformation.” If the sun rose up all at once it would blind us. God first sends the morning star to pierce the darkness so we become accustomed to a little light, and the sun gradually rises until noonday when the  darkness is gone and

the earth was lightened of his glory. Revelation 18:1 WYC

So while many think there are many different church denominations because everyone interprets the Bible differently, truth is, each Protestant church has discovered different points of light about the gospel, leading us gradually out of the Dark Ages. It is not so much about interpreting things differently as  it is about progressing as we have more light, with each ray of light leading us farther and farther out of darkness into the full light of the cross.

God has always had a people in every church, and the Protestant reformers were a light in the their time, leading to the Protestant Reformation, which brought us to the religious awakening and Advent Movement.

So the question is, what new light has the Advent Movement shined on the gospel of the cross?

1. The Gospel saves us from death instead of eternal torment.

The wages of sin is death and not eternal torment. As we study the doctrine of the punishment of the wicked, in the light of the cross, we get new light not only on doctrine but more importantly on the character of God. God is not a psychopath wanting to torture people because they did not love Him, and make them wish they had. He is a God of love. The purpose of hell is not to torment sinners (Though there will be torment and weeping and gnashing of teeth for a time) but rather to put sinners out of their misery.

For God loved so the world [Forsooth God so loved the world], that he gave his one begotten Son, that each man that believeth in him perish not, but have everlasting life. John 3:16 WYC

The most popular verse of the Gospel tells us Jesus saves us from perishing and not eternal torment in hell.

2. Jesus really died for us.

The Biblical teaching of the state of the dead changes how we view the sacrifice of Jesus on the cross. If we believe in the immortality of the soul, and that one does not really die, then Jesus never died and we are still without a Savior. However, the Bible teaches us that Jesus did not only truly die, but He died the second death for us. He faced not only death but the death of the wicked, which meant He loved us so much He was willing to go into total oblivion and be totally separated from God. He did not save us from the death of the righteous. He experienced and saved us from the death of the wicked – being totally separated from God, which has the effect of eternal oblivion.

3. Jesus saves us from our sin, not in our sin.

I once heard a Protestant preacher on the radio say, “In order for you to be able to call Jesus your Savior He has to actually save you from something.” The preacher went on to talk about how Jesus saves us from sinful addictions. Seventh-day Adventists understand that on the cross Jesus freed us from both the penalty of sin and the power of sin.

God the Father made him sin for us, which knew not sin, that we should be made [the] rightwiseness of God in him. 2 Corinthians 5:21 WYC

Okay I think that last one needs a little help from the NLT!

He personally carried our sins in his body on the cross so that we can be dead to sin and live for what is right. By his wounds you are healed. 1 Peter 2:24 NLT

God is a loving God who is not going to torment the wicked for all eternity because they did not love Him. He is a God of love who does not wish for us to perish. By understanding the Bible truth about death we understand the depths of Christ’s sacrifice and what great depths he was willing to go to in order to save us. We understand that He saves us from the penalty of sin, and from the power of sin, so that we don’t have to be slaves to the sinful addictions that hurt us over and over.

This is the gospel that pierced the dark ages until it will one day be preached all over the world and then the world will be lightened with His glory. May we engage in the work of spreading this Good News!