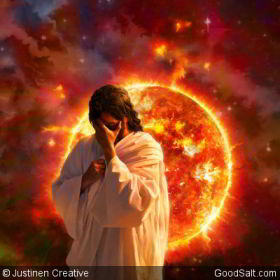 To me, the biggest lie out of the Dark Ages is not that Sabbath was changed to Sunday, or that when you die you go straight to heaven. To me, no lie distorts the character of my loving heavenly father like the lie that sinners will be tormented throughout the endless ages of eternity. Fact is:

It is no arbitrary decree on the part of God that excludes the wicked from heaven; they are shut out by their own unfitness for its companionship. The glory of God would be to them a consuming fire. They would welcome destruction, that they might be hidden from the face of Him who died to redeem them.  –Ellen White, Steps to Christ, page 17

Did you ever notice that Jesus did not tell the demons He could not be around them? The demons told Jesus they could not around Him! (For example, see Matthew 8:29.) So to the unconverted heart, the glory of God is hell, while to the converted heart God’s glory is paradise!

When the fire in Revelation 20:9 comes down out of heaven and consumes the wicked, that fire is the actual presence of God. God’s presence will be hell to those who hate Him, while it will be paradise to those who love Him. I believe this is why the Bible refers to an eternal fire. God is the eternal fire. But God’s love is not going to torture the wicked throughout eternity. God’s love will burn for eternity, but it will put sinners out of their misery instead of torturing them for eternity.

A skewed understanding of hell skews our understanding of God’s love and character, which is exactly what Satan wants. To properly understand the punishment of the wicked, like all other Bible teachings, we must look at it in the light of the cross. Please allow me to share a lesson from my series of In Light of the Cross Bible Study Guides:

The Punishment of the Wicked

The wicked will be destroyed by fire. The punishment will be everlasting, but the punishing will not. The wicked will die instead of being tormented for all eternity. See John 3:16, Romans 6:23, Obadiah 1:16, Matthew 10:28, Ezekiel 18:4, 20.

Importance of knowing the truth about the punishment of the wicked

The teaching of people being tortured throughout all eternity is the most satanic false doctrine of all! It totally misrepresents the love and character of God, making it impossible to love and know Him the way He loves and knows us.

Many churches use hell and fear as a motivation for doing good because they do not properly understand the love motivation. They do not understand the depths of Christ’s sacrifice in dying the second death. They seem to understand the cross to be a mere pain endurance marathon instead of seeing a Savior who was actually willing to say good-bye to life and heaven forever in order to save the world.

When the early church saw the depths of Jesus’ love and sacrifice it turned the whole world upside down! It changed everything. God’s love constrained, empowered and motivated the believers. And this love is the only motivation that will actually succeed today in transforming people. In Galatians 6, Paul writes of a faith that works by love, not a fear of punishment. In John 14, Jesus says, “If you love Me, keep My commandments,” not “if you don’t want to go to hell you better keep my commandments.” Followers of Jesus must uplift the cross and the truth about the cross at all times.

I have a friend who is involved in a prison ministry that visits a juvenile detention center. He told me that they had recently shared the truth about hell with the young men there and that the chaplain at the jail got very upset with him for letting the young men know that the punishment of the wicked is not an eternity spent in hell but rather death just like the Bible says in John 3:16 and Romans 6:23. The chaplain did not want the offenders to know the truth about the punishment of the wicked because he wanted the fear of being tormented for all eternity to motivate them to behave.

Young men in juvenile centers and people everywhere else need to know that there is a God who did way more than suffer for six hours on a cross. He faced the second death for them. He loved them more than He loved his own life. He loved them so much that when tempted to come down from the cross and go back to heaven He chose to die instead. Jesus stayed on that cross for the young men in the juvenile detention center because the thought of heaven without them was hell to Jesus!

When the love motivation receives its proper emphasis, it will accomplish so much more than fear motivation. Some people quote John 3:16 while preaching of an eternal torment of sinners, but that verse clearly says those who do not believe will perish instead of being tortured throughout the ceaseless ages of eternity.

Further study on the punishment of the wicked

What is the opposite of eternal life?

“For God loved the world so much that he gave his one and only Son, so that everyone who believes in him will not perish but have eternal life. John 3:16 NLT

Those who don’t believe perish. They are not tortured for all eternity.

What is the wages of sin?

For the wages of sin is death, but the free gift of God is eternal life through Christ Jesus our Lord.  Romans 6:23 NLT

Note that the wages of sin is not eternal torment in hell.

What becomes of the soul or person that sins?

For all people are mine to judge—both parents and children alike. And this is my rule: The person who sins is the one who will die. Ezekiel 18:4 NLT

KJV says soul, NLT says person. Both the KJV and NLT make it clear that the entire soul or person dies in hell and will not be tormented throughout eternity.

How long does the devil have?

Therefore, rejoice, O heavens!
And you who live in the heavens, rejoice!
But terror will come on the earth and the sea,
for the devil has come down to you in great anger,
knowing that he has little time.” Revelation 12:12 NLT

The devil does not have eternity in hell or anywhere else. He has but a little time left to exist.

What will happen to the devil or Satan?

You defiled your sanctuaries with your many sins and your dishonest trade.

So I brought fire out from within you, and it consumed you. I reduced you to ashes on the ground in the sight of all who were watching. All who knew you are appalled at your fate.You have come to a terrible end, and you will exist no more.” Ezekiel 28:18-19 NLT

Satan, like all sinners, will be annihilated and exist no more.

What happens to both body and soul in hell?

“Don’t be afraid of those who want to kill your body; they cannot touch your soul. Fear only God, who can destroy both soul and body in hell. Matthew 10:28 NLT

Neither soul nor body are tortured throughout the ceaseless ages of eternity. Both are destroyed.

What is the final end of the wicked?

The Lord of Heaven’s Armies says, “The day of judgment is coming, burning like a furnace. On that day the arrogant and the wicked will be burned up like straw. They will be consumed—roots, branches, and all.

“But for you who fear my name, the Sun of Righteousness will rise with healing in his wings. And you will go free, leaping with joy like calves let out to pasture. On the day when I act, you will tread upon the wicked as if they were dust under your feet,” says the Lord of Heaven’s Armies. Malachi 4:1-3 NLT

There will be nothing left of the wicked – nothing but ashes.

What does the lake of fire stand for?

Then death and the grave were thrown into the lake of fire. This lake of fire is the second death. Revelation 20:14 NLT

What is God’s promise?

I heard a loud shout from the throne, saying, “Look, God’s home is now among his people! He will live with them, and they will be his people. God himself will be with them. He will wipe every tear from their eyes, and there will be no more death or sorrow or crying or pain. All these things are gone forever.”Revelation 21:3- 4 NLT

Sinners cannot be eternally tormented in light of the promise that there will be no more pain. The promise is unconditional.

Can we trust that promise?

And the one sitting on the throne said, “Look, I am making everything new!” And then he said to me, “Write this down, for what I tell you is trustworthy and true.”  Revelation 21:5 NLT