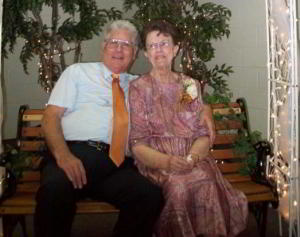 My parents at their 50th wedding anniversary

You may not think that a man who has been single all his life would know about love and romance, but I do. After growing up in the church and over 20 years of ministry I have seen a lot. What I have seen causes me to take love, romantic love more seriously. The media today shows you a shallow love, consisting of  plastic faces, plastic breasts and plastic hearts. I have seen way more than that.

I have stood in the hospital hallway with an 87 year old man, who was crying like a little boy because his wife of 67 years lay sick in the room nearby, close to death. She was his life. They never went anywhere without each other. They washed the dishes together every night because whatever the other was doing, the other wanted to be there. Neither of them ever ran to the post office alone. They went together because they loved being together. I ask myself, am I ready for that kind of love? By the way, the wife did not die. She is still alive, but her husband died a few months ago. She still talks about him all the time.

Marriage is for life. If I fall in love like that, will I one day have to mourn the death of my spouse? Or will she mourn my death? I remember a story about an old man standing at the fresh grave of his wife of many decades. As he stood there, he was overheard saying, “It ended  exactly how I wanted it to. She died first.” Let that sink in. It may not mean what you think. If I fall in love and get married I will not want to lose my wife and hopefully she would not want to lose me. Selfishness would make me want to die first so that I can get out of grieving her death when she goes. A lot of selfless love was behind the old man’s words when he said he was glad she died first so that she would not have to grieve. He grieved instead. That’s love. I believe that’s what Paul talks about in 1 Corinthians 13.

I have seen a wife taking care of her sick husband day after day year after year. Because of his sickness it has been years since he was capable of doing anything for her. Even when he was well he was not the most faithful. Still she cares for him night and day year after year. Why? Because she made a vow 35 years ago. In her eyes, his lack of integrity on his vow did not loosen her from her vow. She still makes good on that vow every day. Wow! That’s love. That’s romance.

I see married men and women spending their time and money unselfishly and making sacrifices every day. I may have never married yet, but I know what real love is. I have seen it, not on the silver screen, but in the daily lives of ordinary people.  Well, ordinary people to Hollywood maybe, but they are heroes to me. Heroes not because of a one-time heroic effort, but life long day after day heroes.