How many of you have seen the movie The Runaway Bride? Julia Roberts plays a woman with a particular personality type. Maggie (the girl played by Julia Roberts), is the absolute epitome of the phrase “all things to all people”.

Have you ever met anyone like that? He (or she) gradually shapes himself into someone he thinks you want him to be. If you say you like jazz, this person likes jazz. If you like anchovy and garlic pizza, that becomes his favorite food. You’ll never have any arguments with him because he will always find some way to agree with you. 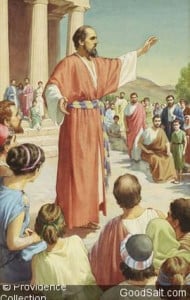 Oddly enough, he’s not doing this consciously at all. In the world of psychology, this is called low ego strength. (In the 70’s and 80’s it was called “co-dependency.”) When a person has low ego strength, he really has no sense of himself—his feelings, his likes and dislikes, opinions. He is open to being led by the people around him. In The Runaway Bride, Ike (Richard Gere) demonstrates to Maggie that she is so dependent on other people for defining who she is that she doesn’t even know how she likes her eggs fixed. She has always just “liked” them the way her boyfriend liked them. When her boyfriend changed, so did her egg preparation preference.

Psychologists will tell you this is NOT a healthy way to live; we can’t make everybody happy all the time. So, then why does Paul say in 1 Corinthians 9:22,

“I have become all things to all men so that by all possible means I might save some.?”

Is he saying that we should be chameleons like Maggie? Is it more of a cultural thing (When in Rome… and all that)? Or none of the above? What do you think?

There are some folks who assert that Paul was telling Christians to be “situational pragmatists.” First I had to look up what that meant—if you already know, go ahead and skip down a few lines, but for the rest of us: A situational pragmatist is someone who goes through life like a chameleon, continually changing to match his environment, for the sole purpose of convincing other people of his ideas. Remember the Nixon years and the phrase “The end justifies the means”? That is a situational pragmatist’s mantra. But I don’t believe it was Paul’s, do you? He never pretended to be something he wasn’t or to believe something he didn’t, just to get folks to become Christians.

Ellen White describes Paul’s approach to his mission like this:

We know that the apostle did not sacrifice one jot of principle. He did not allow himself to be led away by the sophistry and maxims of men. He was not to coincide with the suppositions and assurances of men who were teaching for doctrine the commandments of men…” (E.G. White, The Southern Work, p76)

Another interpretation of Paul’s statement “all things to all men” is that Paul was keeping up with the cultural changes around him so that his message remained “culturally relevant.” This particular angle has taken up a lot of web space. People feel very strongly about what they believe Paul would/would not have condoned if he were around today. Would he have added music to his worship service that did not consist of hymns in the hymnal? One pastor went so far as to comment that he believed Paul would be the first to be thrown out of the church today for disobeying the law.

Mrs. White explains it a bit differently in Sketches From the Life of Paul, p. 214:

“…his purpose to become all things to all men as far as he could do this and not sacrifice principle,….”

So, Paul wasn’t a chameleon and he wasn’t a pragmatist, so what was his point?

“He [Paul] did not approach the Jews in a way to stir up their prejudice. He did not run the risk of making them his enemies by telling them the first thing that they must believe on Jesus of Nazareth; but he dwelt on the promises of the Old Testament scriptures, which testified of Christ,… Thus he led them along …, showing them the importance of honoring the law of God. He also gave due honor to the ceremonial law,… After dwelling upon these things, evincing that he had a clear understanding of them himself, he brought them down to the first advent of Christ, and proved that in the crucified Jesus every specification had been fulfilled. This was the wisdom that Paul exercised. He approached the Gentiles, not by exalting the law at first, but by exalting Christ,… Thus he varied his manner of labor, always shaping his message to the circumstances under which he was placed; and, yet,… many would not be convinced. There are some who will not be convinced by any method of presenting the truth. The laborer for God should, nevertheless, study carefully the best method, in order that he may not arouse prejudice or stir up combativeness unnecessarily. Let him give the people evidence that he is a true Christian, conscientious, desiring peace and not strife, and that he has a love for their souls. Thus the confidence of the people will be gained. (E.G. White, The Atlantic Canvasser, December 11, 1890)

This tells me that in the service of Christ, we must know who we are: We are created in God’s image and very much loved by Him. When we are secure in Him, we no longer need to think of ourselves, but we can focus on the best way to approach others to share God’s truth with them.