↓
Home→Beliefs About Salvation→Christ's life death & resurrection - Fundamental Belief 9→Who Will Stand True Against the Majority? 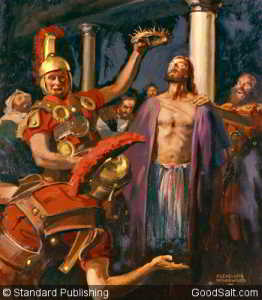 I recently finished a biography of John Wycliffe, 14th century herald of the reformation. I learned some fascinating info I had not previously known. Like the prophet Daniel, Wycliffe left home as a teen, never to return. John Wycliffe was not merely the first to provide, with his assistants, the entire Scriptures in English, but he was really the first to seriously question the Scriptural authority for the Catholic doctrine of transubstantiation and the infallibility of the pope. Wycliffe was an ardent social activist, promoting simplicity in order to have more means to help the poor.1

Though many opposed Wycliffe’s reforms, I was glad to discover there was a small circle of colleagues at Oxford University that stood loyally by him, even when he was abandoned by many in high places. I could understand the courage he drew from this little circle of loyal friends who prayed and discussed the Scriptures with Wycliffe many evenings. What a blessing these friends were to him!

But as I read further, I discovered that every one of Wycliffe’s long term Christian friends, including his best friend Nicholas Hereford, eventually recanted their reformed beliefs and turned their backs completely on Wycliffe. Some recanted after a few days in prison, some recanted after being offered prestigious academic or priestly positions in exchange for turning their backs on Wycliffe’s teachings, some gave up their faith for money.

In the end, all of Wycliffe’s friends that he treasured through his days at Oxford abandoned him. Yet, he kept the faith. He refused to be bought or sold. Neither intimidation, persecution, harassment, or loss of friends deterred him from his belief in Scripture-based reform. He believed that the God who said, “You are chosen!” (Isaiah 41:10) was the God Who would ultimately call him to eternal life. His love for Jesus outweighed every earthly inducement.

When I finished Wycliffe’s biography, I sat for a long time and thought. What made most of the Jewish youth that began attending the University of Babylon give up their faith? Out of the hundreds, perhaps thousands of young Jews taken as prisoners of war who defected from their religious roots, why did just four remain faithful? What made the difference?

Wycliffe’s Oxford friends were completely convinced that his reforms were Scriptural. It seems from most accounts that his friends were at one time sincere in their prayers and their love for Jesus. Why did they drop out and Wycliffe alone remain true?

Not long ago, I was in Rome, looking down at the arena of the ancient Coliseum. I thought of Tillimicus. Tillimicus was a monk living back in the days when gladiators battled to the death for the amusement of blood-thirsty spectators. Tillimicus attended one of those gruesome contests, and was horrified to see a mortally wounded gladiator carried off the field, while the next two combatants prepared for their contest.

Not stopping to think of the danger to himself, or the odds of one person challenging 50,000 unruly fans, Tillimicus jumped out of his seat and ran onto the Coliseum’s arena. Shouting to the crowd, he begged them to stop the senseless bloodshed. Everywhere, spectators began standing with thumbs upturned, indicating that they agreed with him. When the gladiators saw that their opportunity for glory and fame might be at risk, they rushed at Tillimicus and speared him to death. But his martyrdom resulted in a decline and eventual abolition of gladiator contests in the Roman Coliseum.

Wycliffe and Tillimicus were not the only ones to stand alone against a whole culture.

Like Wycliffe, just when Jesus desperately wanted the prayers and support of His friends, they abandoned him. “He was despised and rejected by men, a Man of sorrows and acquainted with grief.” Alone and friendless, Jesus nonetheless took the death that should have been ours.

He was wounded for our transgressions; he was bruised for our iniquities. With the bloody lashes to His back, we are healed. Dragged to and fro from palace to judgment hall, He was mocked, beaten and condemned.

“And when they were come to a place, which is called Calvary, there they crucified Him.”

All of heaven looked with grief and amazement at Christ hanging upon the cross. But only thus could He redeem us from the curse of the law, having been made a curse for us.

“The time is not far distant when the test will come to every soul. The observance of the false sabbath will be urged upon us. The contest will be between the commandments of God and the commandments of men. Those who have yielded step by step to worldly demands, and conformed to worldly customs, will then yield to the powers that be, rather than subject themselves to derision, insult, threatened imprisonment, and death. At that time the gold will be separated from the dross. . . . Many a star that we have admired for its brilliance will then go out in darkness. Those who have assumed the ornaments of the sanctuary, but are not clothed with Christ’s righteousness, will then appear in the shame of their own nakedness.”–Prophets and Kings, p. 188.

” The work which the church has failed to do in a time of peace and prosperity, she will have to do in a terrible crisis, under most discouraging, forbidding, circumstances. The warnings that worldly conformity has silenced or withheld, must be given under the fiercest opposition from enemies of the faith. And at that time the superficial, conservative class, whose influence has steadily retarded the progress of the work, will renounce the faith, and take their stand with its avowed enemies, toward whom their sympathies have long been tending. These apostates will then manifest the most bitter enmity, doing all in their power to oppress and malign their former brethren, and to excite indignation against them. This day is just before us. The members of the church will individually be tested and proved. They will be placed in circumstances where they will be forced to bear witness for the truth. Many will be called to speak before councils and in courts of justice, perhaps separately and alone.”–Testimonies, vol. 5, p. 463.

I believe that what motivated Wycliffe, what motivated Daniel and his three friends to come apart, be separate, remain true, was the love of Christ. This must be our motivation in the crises just before us. “Love so amazing, so divine, demands our life, our soul, our all!”