↓
Home→Feature→A New Commandment That Was There All Along 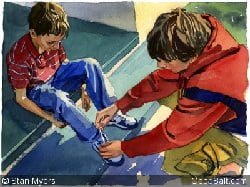 There is a trick question I love to ask people. What was the tallest mountain in the world before Mount Everest was discovered? I get all kinds of answers, like “Mount McKinley “and so forth, but you know what the answer is? Mount Everest!

Mount Everest was the tallest mountain in the world (Now I know a lot of geography buffs are going to tell me there are even taller mountains in the depths of the ocean) even before it was discovered. Just like the Americas were here long before Columbus ever “discovered” them. But you know what? Columbus did indeed discover America.  And so has every person who has ever set foot on its soil!

But I digress. My point about the riddle about the tallest mountain is that Mount Everest was there before it was discovered.

Jesus tells the disciples He has a “new commandment” for them.

“So now I am giving you a new commandment: Love each other. Just as I have loved you, you should love each other.” John 13:34 NLT

“Do not seek revenge or bear a grudge against a fellow Israelite, but love your neighbor as yourself. I am the Lord.” Leviticus 19:18 NLT

So like Mount Everest this commandment had been around since the foundation of the world. When Jesus said, it was new, what He meant was, “It is new to you! You are to keep this old commandment in a new way – the way I have demonstrated it to you.” It was new to the disciples who just moments earlier, were sitting around arguing over who was the greatest and refusing to wash each others’ feet. America may have been new to Columbus when he discovered it, but fact is millions already knew it was there! It was just new to Columbus!

So it is today. While many pray for a revival and wish the church would get back on track with their pet doctrine or tradition, Jesus reminds His disciples that the number one proof of revival and Godliness is:

“Your love for one another will prove to the world that you are my disciples.” John 13:35 NLT

Do you remember when God had Moses set up a bronze pole with a serpent on it? It was to point people to the Messiah and His sacrifice. But it became a problem when people started worshiping the pole instead of the Messiah it was suppose to point them to! In the end, Hezekiah had to destroy it.

“He removed the pagan shrines, smashed the sacred pillars, and cut down the Asherah poles. He broke up the bronze serpent that Moses had made, because the people of Israel had been offering sacrifices to it. The bronze serpent was called Nehushtan.” 2 Kings 18:4 NLT

Somehow the pole had become more important than the event it represented. Love for God and humankind had been supplanted by this love for a pole. So in a revival Hezekiah destroyed the pole because people were worshipping it and loving it more than they were worshiping God and loving their neighbor.

Before we have a true revival in our time are there some poles you need to destroy? We know God’s law stands firm forever and will never be done away, but have we become so wrapped up in our laws and theology that we have forgotten Who the laws point to, just like those worshiping the pole forgot Who it pointed to?

There are many issues facing our church, but there is nothing wrong with our church that can’t be fixed by what is right with our church, as long as we love one another and don’t let our personal pet denominational traditions become so big to us that we forget about our love for God and our neighbor.