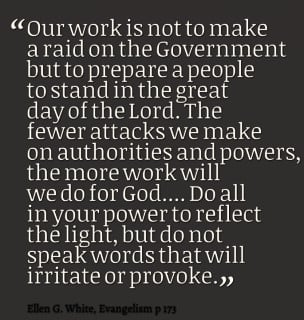 Not too long ago, I wrote a blog titled “The End Time and Conspiracy Theories.” In that blog I shared my thoughts regarding the relationship between Christians in general and the ever increasing popularity of conspiracies. In this post, I would like to more specifically address Seventh-day Adventists and conspiracy thinking by sharing some thoughts from the life of church co-founder and prophetess Ellen G. White and how she dealt with this issue. I trust this will be a blessing for Seventh-day Adventists and Christians of other denominations as well.

The first thing to point out is that Ellen White didn’t really deal with the issue of conspiracy theories. Conspiracy theories, while growing in her day, where not as widespread as they are today. However, she certainly lived in a time when indulgence in conspiracy thinking was growing. The Illuminati and Free Masons were already on the scene and, as we will see later, Ellen White even mentioned the Free Masons. In addition, Ellen White interpreted biblical prophecy using the historicist method, like Martin Luther, John Calvin, Isaac Newton and many other Christians throughout history. This method assumes that human history and Bible prophecy walk hand in hand and not separately from one another. As such, Ellen White understood many apocalyptic prophecies in a manner which exposes or unveils certain activities that Satan will be involved in during the last days of earth history.

While I believe historicism to be the most accurate interpretation of Bible prophecy, there is the danger that it can breed a desire to go beyond the Bible to explore these “last-day satanic activities.”[i] Those who do this immerse themselves in conspiracy theories, all the while thinking they are studying prophecy. But this is a mistake. Prophecy is what the Bible clearly teaches regarding last-day events and nothing more. Once one engages in extra-biblical information hunting of “hidden” information, one is no longer studying prophecy but biased speculation at best. It is evident that, while Ellen White was a historicist (which leads to the Sunday law understanding), she never engaged in extra-biblical speculations. She did not waste her time talking about the “black pope, Illuminati, Freemasony, Communism, or government secrets.” The reason? One can be shown from Scripture. The other cannot.

The second thing to consider is the perceived necessity of investigating and brooding over perceived conspiracies. If such an activity were necessary for Christian growth and preparation for final events, then I wonder why God did not instruct Ellen White to engage in it or why she never engaged in it herself. For example, the original Illuminati was founded in 1776, just fifty-one years before Ellen White was born. If knowledge of the Illuminati and their inner workings were necessary, why did God not see fit to tell Ellen White about it? In all of her writings there is not one syllable devoted to the Illuminati. The Free Masons trace their origins back to the late 16th or early 17th century, and during Ellen White’s day, Free Mason conspiracy theories abounded. In an article in Publiceye.org titled “The Illuminati Freemason Conspiracy” the author states that “The idea of a widespread freemason conspiracy originated in the late 1700’s and flourished in the US in the 1800’s.”[ii] Yet once again, Ellen White’s writings are void of such conspiracy theories.

Ellen White mention the Free Masons. But it’s important to note what she said and what she didn’t say. Ellen White counseled, under God’s direction, that Christians were to stay away from the Free Mason society for practical and obvious reasons. Seventh-day Adventist pastor Shawn Brace writes:

Basically, Ellen White addresses the topic in about five different places, and each time it is abundantly clear that she does give counsel to stay away from associating with the Free Masons. However, one must read why she advises we stay away from them before prognosticating about how they are trying to take over the world. Much to many people’s surprise, no doubt, the reasons she gives for avoiding them have nothing to do with their alleged satanic rituals or sinister plots to take over the world. Rather, the reasons she gives as to why one should avoid the Free Masons is about the same reasons she would give for not hanging out in a bar.[iii]

Ellen White never brought up a single “conspiracy theory” regarding the Free Masons. She simply gave the same reasons any other wise Christian would have given. The Free Masons are worldly, and their teachings are antithetical to the gospel. As Christians we should not be a part of such a fraternity.

So far we have seen that Ellen White, though certainly having had opportunities, never engaged in conspiracy theory talk. This alone should cause those of us fascinated with conspiracies to wonder if perhaps we are wasting our time with pointless investigations. However, I would also like to point out some quotations from Ellen White (with personal comments in brackets) that give us principles to keep in mind when dealing with this issue.

“We need far less controversy [a characteristic of conspiracy theories], and far more presentation of Christ. Our Redeemer is the center of all our faith and hope” (EV, 172).

“Our work is not to make a raid on the Government but to prepare a people to stand in the great day of the Lord. The fewer attacks we make on authorities and powers, the more work will we do for God….[Conspiracy theories do exactly what we are told not to do in this quote] Do all in your power to reflect the light, but do not speak words that will irritate or provoke” (EV, 173).

“You should have a clear apprehension of the gospel. The religious life is not one of gloom and of sadness but of peace and joy coupled with Christlike dignity and holy solemnity [Those fascinated with conspiracies often exemplify a doom and gloom version of Christianity and not the peace and joy that should be had]. We are not encouraged by our Saviour to cherish doubts and fears and distressing forebodings; these bring no relief to the soul and should be rebuked rather than praised [Conspiracy thinking nourishes doubts, fears, and distressing forebodings. Rather than praise these things by our focus on them we should rebuke them by ignoring them]. We may have joy unspeakable and full of glory. Let us put away our indolence and study God’s Word more constantly” (EV, 180).

“I have been shown that it is the device of the enemy to divert men’s minds to some obscure or unimportant point, something that is not fully revealed or is not essential to salvation [a classic description of conspiracy theories]. This is made the absorbing theme, the “present truth,” when all the investigations and suppositions only serve to make matters more obscure and to confuse the minds of some who ought to be seeking for oneness through sanctification of the truth” (EV, 182).

“A noble, devoted, spiritual worker will see in the great testing truths that constitute the solemn message to be given to the world, sufficient reason for keeping all minor differences concealed, rather than to bring them forth to become subjects of contention. Let the mind dwell upon the great work of redemption, the soon coming of Christ, and the commandments of God; and it will be found that there is enough food for thought in these subjects to take up the entire attention [If we spent more time getting to know Jesus we wouldn’t have time for speculations. Conspiracy adherents often have much knowledge of many things but they are lacking in the preciousness of Jesus. Rather than allure they repel those around them]” (EV, 183).

“Satan is pleased when we magnify his power [This is the nature of conspiracy theories]. Why not talk of Jesus? Why not magnify His power and His love” (MHH, 43)?

While these statements may not be directly dealing with the issue of conspiracy theories I don’t see how one can engage in conspiracy thinking without violating many of the godly principles Ellen White provides above. It is clear that Ellen White did not see conspiracy theorizing as a necessary element of preparing for last-day deceptions.

However, Ellen White is not our example – Jesus Christ is. In Jesus we find our pattern – one that is focused on showing mercy, love, and empathy to the suffering and who wasted no time talking about conspiracies. I pray my life will reflect such beauty. Ellen White wrote,

Millions upon millions of human beings, in sickness and ignorance and sin, have never so much as heard of Christ’s love for them. If our condition and theirs were to be reversed, what would we want them to do for us? All this, so far as lies in our power, we are to do for them. Christ’s rule of life by which every one of us must stand or fall in the judgment is, “‘Whatever you want men to do to you, do also to them.’” Matthew 7:12[iv]

I don’t know about you, but I would want to hear that there is a Savior who “regards with infinite tenderness the souls whom He has purchased with His own blood. They are the claim of His love. He looks upon them with unutterable longing.”[iiv] I would want to know that there is One whose name is Jesus who can save the worst of the worst. When my heart is broken, speak to me of His love! When sin has me bound in iron chains, tell me of His power! When I am lost, with nowhere left to go, please talk to me of the “One who can calm the raging seas, give sight to the blind, pull the lame up to their feet”.[v] Tell me “God loves you, Marcos,” “with a love so strong he’ll never let you go, oh you’re not alone”.[vi]

[i] In case one is tempted to view this danger as an argument against historicism, let us not forget that futurism, the most popular method of apocalyptic interpretation, also breeds countless conspiracy theories. To reject one for this danger is to reject the other as well. In addition, the validity of a system of thought cannot be determined by it’s misuses.