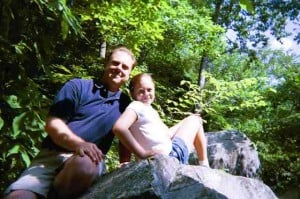 My niece Hannah and I, a few years after this story took place.

Several years ago I was flying from Fort Worth Texas to go home to Tulsa, Oklahoma, for the Thanksgiving holiday. It was a short flight and I was on a commuter plane. Upon landing, instead of pulling up to the terminal like the big jets, we were let out on the tarmac. I went up the stairs into the terminal and saw my family staring out the window looking for my plane, which they thought would pull all the way up to the terminal. (This was well before 9-11 when family and friends could greet you right at the gate.)

Since they were still looking out the window and did not know I was already there, I decided to play a joke on them. I found a newspaper and went to sit down beside them. I listened as Mom said, “Is that William’s plane landing now?” Dad replied, “No. That is an American Airlines plane. He is coming in on Delta.” My two-year old niece Hannah was the first to notice me. She was very bright because, instead of saying anything, she just smiled at me with a huge smile and twinkle in her little eyes, as though she understood the joke and was playing along too. She knew I was there, even though the grown-ups were clueless of my presence.

Since the rest of my family was not as observant as my two-year old niece, I put my paper down and turned to my sister sitting next to me. “Ma’am, will you please tell me what time it is?” She glanced at her watch and then glanced back at me in shock. “He’s here!” she exclaimed. The whole family was shocked to find that I was sitting with them while they were still expecting me to come. The other day when I mentioned this to my mother, she remembered how startling it was to find I was with them while they thought I was far off. For years now I have been using this experience as an illustration when preaching about the resurrection of Jesus. Mary stood at the tomb and in her grief was unaware of Jesus’ presence.

In her grief, Mary did not recognize the presence of Jesus, but He was there just the same. On that beautiful day Mary was not the only person not recognizing His presence and identity. Later in the same day Jesus is walking down a road that led to Emmaus. Luke fills us in.

As they walked along they were talking about everything that had happened. As they talked and discussed these things, Jesus himself suddenly came and began walking with them.  But God kept them from recognizing him.

He asked them, “What are you discussing so intently as you walk along?”

They stopped short, sadness written across their faces.  Then one of them, Cleopas, replied, “You must be the only person in Jerusalem who hasn’t heard about all the things that have happened there the last few days.”

“The things that happened to Jesus, the man from Nazareth,” they said. “He was a prophet who did powerful miracles, and he was a mighty teacher in the eyes of God and all the people.  But our leading priests and other religious leaders handed him over to be condemned to death, and they crucified him.  We had hoped he was the Messiah who had come to rescue Israel. This all happened three days ago. Then some women from our group of his followers were at his tomb early this morning, and they came back with an amazing report.  They said his body was missing, and they had seen angels who told them Jesus is alive! Some of our men ran out to see, and sure enough, his body was gone, just as the women had said.

Then Jesus said to them, “You foolish people! You find it so hard to believe all that the prophets wrote in the Scriptures. Wasn’t it clearly predicted that the Messiah would have to suffer all these things before entering his glory?” Then Jesus took them through the writings of Moses and all the prophets, explaining from all the Scriptures the things concerning himself. Luke 24:13-27

For years I have been using this passage when studying about the Scriptures, on how Jesus could have just opened their eyes and showed them his nail-scarred hands and said, “Look it’s me!” But He did not do this. Instead of going by sight, He wanted them to go by the Scriptures. So instead of opening their physical eyes it was their spiritual eyes and their hearts that He opened. Seeing will never become believing, until you can finally see it with your heart and not just your eyes. So today, Jesus does not want us putting our faith in feelings or in signs and wonders. He wants us to put our faith in the Scriptures. While listening to our associate pastor, Claudette Aleman, speak one Sabbath I realized there was even more, as she read:

“As they talked and discussed these things, Jesus himself suddenly came and began walking with them.  But God kept them from recognizing him.”

Then she asked the question, “Have you ever gone through a hard time in your life, only to find that Jesus was with you, and you did not know it?”

I was reminded that, just like Mary, these two men were grieving, and Jesus came near and joined them, but they did not perceive that it was Jesus who was with them. Friend, you may be going through a hard time right now and wonder where God is. I promise you He is with you. I know this because the Scriptures, which Jesus saw as more valid than sight, say so.

Even when I walk   through the darkest valley, I will not be afraid, for you are close beside me. Psalms 23:4 NLT

When you go through deep waters, I will be with you. Isaiah 43:2

Today we have Facebook, text messaging and even Skype to keep us close to each other, but even better than that is what Paul tells:

“His purpose was for the nations to seek after God and perhaps feel their way toward him and find him—though he is not far from any one of us.” Acts 17:27

Today when I go through a dark valley and don’t necessarily feel God’s presence, I just open the eyes of my heart, my child-like heart, and smile at God with a twinkle in the eyes of my child-like faith. He smiles back at me. The grown-up skeptics may be clueless of His presence. My little niece was not imagining things when she saw me, though no one else could. I know my child-like heart is not imagining things when it sees God. We smile at each other. I know He is near.