↓
Home→Daily→Monday: The Days of Creation

In recent years there has been a trend to view the Creation week as non-literal, as a metaphor, a parable, or even a myth. This has arisen in the wake of the theory of evolution, which assumes long ages of time to account for the development of life on planet Earth.

What does the Bible teach on this subject? Why are the “days” of Creation in Genesis chapter 1 to be understood as literal, and not figurative, days? 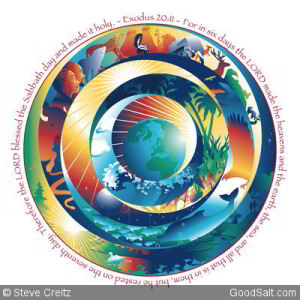 The Hebrew word yôm, or “day”, is used consistently throughout the Creation narrative for a literal day. Nothing in the Genesis Creation narrative indicates that anything other than a literal day was meant, as we understand a single day today. In fact, some scholars who don’t believe the days were literal will, nevertheless, admit that the author’s intention was to depict literal days.

It is interesting that God Himself designates this name for the first unit of time (Gen. 1:5). Yôm, or day, is defined with the phrase “and there was evening and there was morning” (Gen. 1:5, Gen. 1:8, etc., NASB). The term is used in the singular, not the plural, meaning a single day.

Thus, the seven days of Creation are to be understood as a complete unit of time, introduced by the cardinal number ’echad (“one”) followed by ordinal numbers (second, third, fourth, etc.). This pattern indicates a consecutive sequence of days, culminating in the seventh day. There is no indication in the use of terms or in the narrative form itself that there should be any gaps between these days. The seven days of Creation are, indeed, seven days as we delineate days today.

Also, the literal nature of the day is taken for granted when God wrote with His own finger the fourth commandment, indicating that the basis for the seventh-day Sabbath rests on the sequence of a literal seven-day, Creation week.