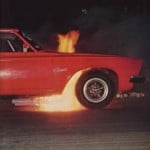 “Paul, an apostle—sent not from men nor by a man, but by Jesus Christ and God the Father…” Galatians 1:1, NIV

If you have ever been to the drag races, you know that it is a noisy place. Powerful engines using explosive fuel mixtures can make it seem like you are in a war zone. Drivers use several techniques to get an edge in the competition where victory can hinge on differences of mere hundredths of a second.

Racers will burn rubber on their slick surfaced tires before taking off on their run in order to get maximum traction between tire and track. They carefully build up torque by racing their engines with a brake on the transmission. They don’t want any of that torque lost by the tires losing traction. It’s a delicate balance, and if they allow too much torque to build up before releasing the transmission brake things can explode and the racing is over, to say nothing of the expense to replace the damaged parts.

Just as a powerful force builds up in the power train of the race car, Christians have a powerful force that builds up in them. That force is the power of the Holy Spirit. It does not come from man or the church but directly from God. Peter spoke about it on the day of Pentecost. He said to those who were seeking salvation, “Repent and be baptized, every one of you, in the name of Jesus Christ for the forgiveness of your sins. And you will receive the gift of the Holy Spirit.” Acts 2:38, NIV

Notice the formula. First, repent; then be baptized. That is all that is required. Then the gift of the Holy Spirit is given. He did not say you might receive the Holy Spirit. He said you will. Why is this formula important? This is not the only place it occurs in Scripture. It is a special ceremony that is done for a certain purpose. If we look at some of the other occurrences, we can understand its significance.

The first example I would like to draw attention to is when Moses set aside Aaron as High Priest for the Israelites in the wilderness. The ceremony had two distinct elements. First there was a cleansing with water. “Then Moses brought Aaron and his sons forward and washed them with water.” Leviticus 8:6, NIV  This was then followed with an anointing with oil. “He poured some of the anointing oil on Aaron’s head and anointed him to consecrate him.” Verse 12  The symbolism here is repeated later for another High Priest. That High Priest is Jesus.

In Matthew 3:13-17, we read, “Then Jesus came from Galilee to the Jordan to be baptized by John. But John tried to deter him, saying, `I need to be baptized by you, and do you come to me?’ Jesus replied, `Let it be so now; it is proper for us to do this to fulfill all righteousness.’ Then John consented. As soon as Jesus was baptized, he went up out of the water. At that moment heaven was opened, and he saw the Spirit of God descending like a dove and alighting on him.  And a voice from heaven said, `This is my Son, whom I love; with him I am well pleased.’” NIV

The washing of Aaron as High Priest prefigured the baptism of Jesus as High Priest (See Hebrews, chapter 7). And anointing Aaron with oil prefigured the anointing with the Holy Spirit.  1 Samuel 16:13 reveals the close relationship between the symbol and the reality. “So Samuel took the horn of oil and anointed him in the presence of his brothers, and from that day on the Spirit of the LORD came powerfully upon David.” NIV

Why are these symbols important? It is because they signify a particular service. That service is ordination to priesthood. When we couple that symbolism with the message of Acts 2:38, we can see that God’s intent is to extend the priesthood to all believers. The same Peter who presented this radical concept on Pentecost also confirmed it later in his epistles. He wrote, “But you are a chosen people, a royal priesthood, a holy nation, God’s special possession, that you may declare the praises of him who called you out of darkness into his wonderful light. Once you were not a people, but now you are the people of God; once you had not received mercy, but now you have received mercy.” 1 Peter 2:9-10, NIV

Because the church cannot bestow the Holy Spirit and it is an essential element for ordination, we can see that ordination comes not from the church but from God. This is why Paul, who understood this principle, could say that he was “…sent not from men nor by a man, but by Jesus Christ and God the Father…” Galatians 1:1, NIV  Because we do not understand this as Paul did, our concept of ordination can become radically flawed.

When we mention ordination today, it should not be tied to being paid a salary by a church denomination or being recognized as properly authorized to perform marriages by the state. Neither of these figured into the ministry of Jesus, nor in the ministry of the apostolic Christian church. Paul by example chose to work as a tent maker to support himself rather than to live on the offerings of his brethren. (See Acts 18:3) His example was one based on the model of a universal priesthood. Perhaps recognizing the ordination of this universal priesthood could remove brakes on the effective proclamation of the gospel in western culture.

We often do not have a good understanding of how to enable ministry. We see an example of this today in the exclusion of the majority of the church from recognized ordination. Women who are in the majority in church membership are also baptized and equal recipients of the Holy Spirit but are relegated to a lesser role for no other reason than their gender. This is like a general ordering over half of his troops to be shot before a major battle then wondering why the battle is not won.

While some might justify this by pointing to the priesthood of the Old Testament as an example of a gender exclusive clergy, those who believe such things need to come up to date. The Aaronic priesthood is dead. It died at the cross. It was only a symbol of the reality which is Christ. And Jesus is not a priest after Aaron but after Melchizedek which the book of Hebrews says is better (Hebrews 7:22).

Why then would anyone choose to perpetuate that which is lesser rather than the greater priesthood of all believers introduced with the reality of the ordination of Jesus and proclaimed by Peter? That reality became the figure of ordination for all. Why would we want to place a brake on the power of the Holy Spirit by refusing to recognize that ordination? Perhaps this is why Paul felt it important to state that he was not sent “by a man.”  His ministry exploded across the Gentile world of his time with the recognition of a universal ordination that allowed the Holy Spirit unrestricted access to willing and eager hearts. Let’s remove the brakes so we can be about our Father’s business. I think it is high time we recognized our ordination and began functioning as a kingdom of priests for God, building pathways home for ourselves and others. Let’s replace the ashes of this world with the beauty of God’s love.