Does anybody remember the old Sabbath School attendance records? Seems to me that they had spaces, not just for recording who actually attended that class, but also spaces for recording how many pieces of literature were handed out, how many contacts were made, and, in the children’s departments, who brought a visitor to Sabbath School. I wonder why we don’t talk about this kind of thing much anymore. Maybe it was a little too much like keeping score. What do you think? 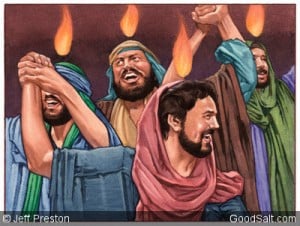 Is there anything wrong with keeping track of and reporting on what we’re doing to spread the word of Jesus to our neighbors and what the Lord is doing for us? It seems like it was something the apostles did whenever they came back from a mission trip. They’d go to their home church and report on what they taught and how people responded to the teaching. The practice started when Jesus was still with them. They’d come and kind of debrief with Jesus.

Why do you think they did that? Is it something we should be doing today? What purpose do you think it served? Is it about keeping score? Who has visited the most shut-ins, handed out the most leaflets or signed the most people up for Bible studies? Maybe for some people, but I don’t believe that’s the outcome we’re looking for.

I believe there are some other much more important benefits of reporting on the progress of our evangelistic or missionary projects to the church. I believe it holds us accountable to our church family to keep the project going.

Even though we don’t work for congratulations or accolades, it helps to get encouragement from our friends.

“Let those who gain such an experience in working for the Lord write an account of it for our papers, that others may be encouraged.”( E.G. White, Colporteur Evangelism, p.85)

“And being let go, they went to their own companions and reported all that the chief priests and elders had said to them. So when they heard that, they raised their voice to God with one accord and said: ‘Lord, You are God, who made heaven and earth and the sea, and all that is in them, who by the mouth of Your servant David have said: “Why did the nations rage, And the people plot vain things? The kings of the earth took their stand, And the rulers were gathered together Against the Lord and against His Christ.”

“‘For truly against Your holy Servant Jesus, whom You anointed, both Herod and Pontius Pilate, with the Gentiles and the people of Israel, were gathered together to do whatever Your hand and Your purpose determined before to be done. Now, Lord, look on their threats, and grant to Your servants that with all boldness they may speak Your word, by stretching out Your hand to heal, and that signs and wonders may be done through the name of Your holy Servant Jesus.’

“And when they had prayed, the place where they were assembled together was shaken; and they were all filled with the Holy Spirit, and they spoke the word of God with boldness.” Acts 4:23-31

Now that’s exciting! And I believe that’s why reporting to each other is so important. Yes, as individuals we’re encouraged to carry on, but when we see the boldness of others for Jesus, we pray for that same boldness to do what Jesus asks us to do.

“Then Moses sent them to spy out the land of Canaan, and said to them, ‘Go up this way into the South, and go up to the mountains, and see what the land is like: whether the people who dwell in it are strong or weak, few or many; whether the land they dwell in is good or bad; whether the cities they inhabit are like camps or strongholds; whether the land is rich or poor; and whether there are forests there or not. Be of good courage. And bring some of the fruit of the land.’ …

“So they went up and spied out the land … Then they came to the Valley of Eshcol, and there cut down a branch with one cluster of grapes; they carried it between two of them on a pole. They also brought some of the pomegranates and figs. … And they returned from spying out the land after forty days.

“Now … came back to Moses and Aaron and all the congregation of the children of Israel … and showed them the fruit of the land. Then they told him, and said: ‘We went to the land where you sent us. It truly flows with milk and honey, and this is its fruit. Nevertheless the people who dwell in the land are strong; the cities are fortified and very large; moreover we saw the descendants of Anak there.  …’

“Then Caleb quieted the people before Moses, and said, ‘Let us go up at once and take possession, for we are well able to overcome it.’

“But the men who had gone up with him said, ‘We are not able to go up against the people, for they are stronger than we.’ And they gave the children of Israel a bad report of the land which they had spied out, saying, ‘The land through which we have gone as spies is a land that devours its inhabitants, and all the people whom we saw in it are men of great stature. There we saw the giants …; and we were like grasshoppers in our own sight, and so we were in their sight.’” Numbers 13:17-33

Wow, outvoted ten to two, but Caleb and Joshua were right and they knew it. But did you notice that they never quit being team players. When God sent all the rest into the wilderness, Caleb and Joshua didn’t say “Told ya so! We’ll be right here when you find your way back.”

They never stopped working for God, even as they spent the next forty years in the wilderness. Being right is often less important that loving our fellow travelers. Sometimes compromise is the best answer as long as we don’t let go of the truth. If we’re fighting amongst ourselves, we won’t have time to spread the Good News.

As we share our successes and failures with each other, encourage each other, and pray for each other, we all become stronger for our task.

“As iron sharpens iron, so a man sharpens the countenance of his friend.” Proverbs 27:17

Remember, we’re not keeping score of bits and pieces, we’re trying to start an avalanche of people on fire for Jesus, filled with the Holy Spirit and spreading the Good News – people who love to talk about their Best Friend, Jesus!