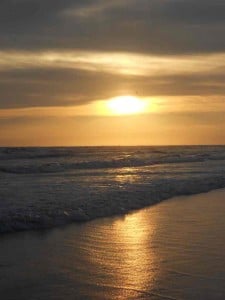 A chance encounter or divine appointment? You be the judge.

Yesterday morning I woke up on my day off. Not sure how I wanted to spend it, I went to deliver some baptismal robes to a nearby church which needed them for Sabbath. When I stopped  by my church to pick them up, my pastor reminded me it was my day off, and I should not be working. I promised him I would take the day off as soon as I delivered the robes.

My friend Adam, who I often hang out with on Thursday nights, told me he would be busy, so I thought this may be a good time to take a long day trip somewhere. I decided on Siesta Keys in Sarasota where I have not been in a while. My plan was to spend some time reading in God’s Word, in prayer, and in taking sunset pictures. As I got ready to leave, something told me to take my Bible. I thought I don’t need to take that along, I have it on my cell phone.  Still I was impressed to take a regular Bible. So I did. I also grabbed the book “Bible Studies Made Easy” and thought maybe I will give it to the waitress wherever I eat.

I got to Siesta Keys early afternoon and went to an Italian place near the beach that I enjoyed many times before. After I left, I scolded myself for forgetting to give the waitress the book. I stopped at a park bench near the beach and spent some time reading in Revelations, since that’s where I am after reading through the entire Bible. I read Chapters 8-12, which gave me plenty to pray and mediate on, as I walked and prayed down the beach. I must have walked four miles. As I got back to where I had parked, I felt very tired and reminded myself that the Tampa Bay Rays had a divisional game tonight on TV. Maybe I should go home and watch it. But I was impressed to stay and take sunset pictures as I had planned. I told myself, I already have hundreds of sunset pictures, and nobody really cares to see any more. They all look the same. Still something inside me said to just stay with the original plan. Lie down on this park bench and rest a while, until the sun starts setting, then take pictures.

As I was lying there, an older man came up and started talking to me. I turned to him, and he realizes I was not who he thought I was. He was embarrassed and apologized, and I told him it was no big deal. I sat up and he started talking to me. First he talked about his bicycle. I told him I hoped the streets in Sarasota are more bike friendly than Tampa. He told me his bike was all he had to get around on and I mentioned that I am often on my bike too. I wanted to identify with him the best I could.

The man glanced at my Bible and asked if I was a pastor. I could have said yes, since I am both a lay pastor and Bible worker, but that really had nothing to do with why I had my Bible with me. I had my Bible with me because I am a Christian. I replied, “I am a Christian.” He then started opening up about his service in Vietnam, and his discharge, all the terrible things he saw over there, and he was specific. I know a lot of people claim to be war veterans and have never actually been to war, but the way he gave specific details indicated he was for real.

He told me how he has given up trying to overcome beer and cigars. I told him the same God who delivered him from Vietnam could also deliver him from those enemies too. He told me how when he returned nobody thanked him for fighting for his country. He told me how he likes to take trash bags and clean up the beach. I asked him if the beach could clean itself up. Of course he said no. I told him that likewise, we can’t clean ourselves up either. Only God can. He was troubled, thinking God had given up on him, so I shared with him the gospel presentation. And I shared with him the story of the serpent on the pole in Numbers 21 and how in John 3, Jesus says, “And as Moses lifted up the serpent in the wilderness, even so must the Son of man be lifted up: That whosoever believeth in him should not perish, but have eternal life.” He said there was so much about life he did not understand. I told him he did not have to understand. Just as the Israelites looked at the pole when bitten by a serpent, likewise when that old serpent the devil bites us, we must look at the cross and we are healed.

He told me his name was Frank and asked for prayer, and I prayed with him. He took my hand and as I prayed his hand trembled and he cried. After our prayer I remembered the Bible study book I had failed to give the waitress. I gave it to him with my church contact info. I invited him to a church in his area.

Frank told me he was homeless and had no address, and he likes it that way. I made sure he knew how to get a hold of me. I assured him God still loves him and has a plan for his life. God has not given up on him. He told me how glad he was that he met me, and I think he meant it. He never asked me for money or anything. He even offered to pay for the book. I think the only things he wanted from me was hope.

As we talked, and he rambled after our prayer, I started thinking, if Adam was not busy tonight I would have been hanging out with him instead. If I had not brought my Bible this man never would have asked or opened up about His need for Christ. If I had given the waitress my study book I would have had nothing to give this man. If I had gone back home to watch the baseball game, which I really felt like doing, I would not have been resting on this park bench when the man found me. And seriously, I had no clue why I was just resting on a park bench instead of driving on home to see the game, until now. I also smiled as I remembered my pastor telling me to take the day off. Seems like when I woke up this morning, wondering what to do, God already had a plan.

I saw the sun starting to set and told Frank that I wanted to take some sunset pictures. I felt as our conversation was now rambling and that my mission was over. I wanted to leave him with the impression of my mission and not our rambling. He very politely told me to go take my pictures and again told me how happy he was to meet me, and thanked me over and over for the Bible study book. I reminded him how to contact me and left to take pictures.

As I was taking pictures, thinking about my encounter, I realized I had made a big mistake! After the sun was down, I went back looking for Frank. I could not find him, but I did find his bike tied to the same tree. I grabbed a pen and paper from my car and left a note tied to his handlebar. The note read, “Thank you Frank, for serving in Vietnam. –William”