Read Daniel 12:2-3. What event is he talking about here, and why, considering what we understand about death, is this event so important to us?

Daniel makes probably the most explicit reference in the Old Testament to the coming resurrection. And as we reflect on this passage, we can learn some very important truths. First, as the metaphor of “sleep” indicates, no immortal soul inhabits human bodies. 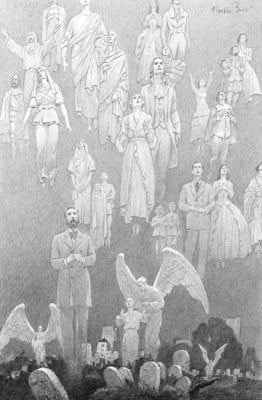 Humans are an indivisible unity of body, mind, and spirit. In death, the person ceases to exist and remains unconscious until the resurrection. Second, our text points to the coming resurrection as a reversal of what happens as a consequence of sin. Indeed, the expression translated as “dust of the earth” in the original language of Daniel 12:2 reads “earth of dust”. This unusual word sequence points back to Genesis 3:19, the only other biblical passage where the word “earth” precedes the word “dust”. This implies that the death pronouncement made at Adam’s fall will be reversed and death will no longer hold sway. As Paul says: “death is swallowed up in victory” (1 Cor. 15:54).

Death ruins and ends everything here. But we are offered the promise that death does not hold the last word for faithful believers. Death is a vanquished enemy. When Christ breaks the chains of death and emerges resurrected from the tomb, He deals the fatal blow to death. Now we can look beyond the temporary reality of death to the ultimate reality of the life we receive from God in Christ. Because Michael “stand[s] up” (see Dan. 12:1), those who belong to Him will also stand up. They will rise from the “earth of dust” to shine like the stars for ever and ever.