Monday’s section of this week’s Sabbath School lesson asks the question, “In what subtle ways are each of us susceptible to having the same kind of attitude as we see revealed here in this “man of sin”? 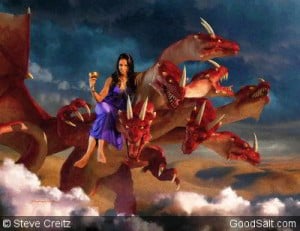 As Adventists, we often think of the anti-Christ as the leader of a system revealed in the book of Revelation. While Revelation does identify a specific leader within a specific system setting himself up as God, and thus an anti-Christ, John the Revelator also tells us in 1 John 2:18, “even now are there many antichrists; whereby we know that it is the last time.” So the Scriptures warn of many anti-Christs.  So who are all these anti-Christs?

To answer this question, let’s back up a little. In studying the three angels message, we see that a so-called religious system, Babylon, falls. Again we know from studying Revelation that this is a specific system. However, we also see that this system has an attitude. That attitude is legalism. Man-made laws and a man-made day of worship combine to make a man-made way of salvation, outside of trusting in the merits of Jesus and His blood.  While Revelation pinpoints this system, it is clear that this attitude can be found in other systems as well, and history has demonstrated it. Were not the Sadducees and Pharisees making their own laws and trusting their own works for salvation? Yet they were not Babylon. So could it be that if I am not careful to crucify self and die daily, that this same attitude of Babylon could be found in my heart too?

So, if it is possible for me to have the attitude of Babylon, would it also be possible for me to have the same attitude as the anti-Christ, thus making me one of many anti-Christs? An anti-Christ is someone who sets himself up as Christ, just as the man of sin mentioned in 2 Thessalonians 2:3-4: “Let no man deceive you by any means: for that day shall not come, except there come a falling away first, and that man of sin be revealed, the son of perdition; Who opposeth and exalteth himself above all that is called God, or that is worshipped; so that he as God sitteth in the temple of God, showing himself that he is God.”  Here we see that the man of sin, or anti-Christ sits in the place of God. So how could I possibly be an anti-Christ, sitting in the place of God? Isaiah 33:22 tells us; “For the LORD is our judge, the LORD is our lawgiver.” Our Lord God is our lawgiver and judge. So, when I set myself up as judge of other people’s motives, or think that I can interpret the law for everybody, I am usurping the seat of God and setting myself up as God, and thus becoming an anti-Christ!

Like Babylon, Anti-Christ is more than a system. It is an attitude. Ellen White explains, that while the pilgrims came to the new world, to escape the anti-Christ, that they carried the attitude of anti-Christ with them to the New World:

“It was the desire for liberty of conscience that inspired the Pilgrims to brave the perils of the long journey across the sea, to endure the hardships and dangers of the wilderness, and with God’s blessing to lay, on the shores of America, the foundation of a mighty nation. Yet honest and God-fearing as they were, the Pilgrims did not yet comprehend the great principle of religious liberty. The freedom which they sacrificed so much to secure for themselves, they were not equally ready to grant to others. “Very few, even of the foremost thinkers and moralists of the seventeenth century, had any just conception of that grand principle, the outgrowth of the New Testament, which acknowledges God as the sole judge of human faith.” (W. Carlos Martyn, The Life and Times of Luther, Vol. 5, p. 297.) The doctrine that God has committed to the church the right to control the conscience and to define and punish heresy, is one of the most deeply rooted of papal errors.(The Great Controversy, pp. 292-3)

2 Timothy 3:16 tells us that the Scriptures are profitable for doctrine and correction. I can only define God’s law by what is in the Scriptures , but not by my personal opinions or traditions, like the Pharisees in Christ’s time, and religious leaders in the Dark Ages did. I am not the interpreter of the Law for the whole world, nor, can I think to change times and laws to meet with my own opinions or inclinations. Since I am not the Lawgiver, I cannot judge people by my own standards.

While open sin must be dealt with by the community of believers, according to 1 Corinthians 6, I as an individual cannot judge inward motives. In judging outward actions we must still be careful. Joseph almost put poor Mary away thinking he had all the evidence of an affair. Even with his overwhelming evidence, he was wrong! Even with all his evidence, he tried to put her away privately without any public embarrassment. What a great example for us to imitate. Even with his incontrovertible evidence, Joseph was not going to judge Mary’s heart.

In 1 Corinthians 6, Paul teaches that churches, not individuals, to judge open and outward actions very carefully. He teaches no one to judge the heart and inward motives. 2 Timothy 3:16 tells us God and the Scriptures alone tell us what is right and wrong. I am not the Lawgiver or the interpreter of the law for the rest of the world.

Only the Lord our God is our Lawgiver and Judge, and when we judge people according to our own standards, opinions and understanding, we usurp the throne of God and become an anti-Christ.