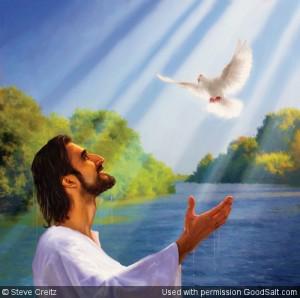 Joe Manning, the Bible teacher, decided he would ask his tenth grade class to come up with a visible object lesson to explain the concept of the Trinity. He gave them three days to submit their contributions. Then he collected the fifteen papers and carefully studied them at home, hoping to give some recognition to the winner.1

The first paper said, “It’s like a family. All the Johnsons, for example. Same family, same name. All very close.”

The teacher frowned. “He’s trying, but there is too much diversity in families for that description to work with the Godhead.”

The second paper said, “The Trinity is like a pod of peas. They cling to the pod and are one.”

“I don’t think so,” the teacher mumbled. “There are still three distinct peas.”

The third paper said, “The Trinity is like an egg.” That answer was followed by a detailed explanation.

Mr. Manning leafed through the other papers one by one. “I think I have given my students an impossible assignment,” he said. “We can’t explain the Trinity. We just have to believe what the Bible says. There is one God. But that one God consists of three persons: The Father, the Son, the Holy Spirit.” Mr. Manning agreed, he accepted, he believed. But he still did not fully understand.

1. The Triune God: the Trinity.  Is it possible to believe something you don’t understand? Do you understand infinity? Do you know exactly how a seed grows in the ground? Can you explain the conception of a life form that will become a human baby? Is it harder to understand the concept of the Trinity than these topics? How does the Bible establish the existence of the Trinity without the word ever appearing on its pages? In what ways are God the Father, God the Son, and God the Holy Spirit equal? In what ways are they equal but different?

2. Living in the desert with one God. Imagine yourself back with the Israelites establishing themselves in the Promised Land. What sort of religion did the various tribes surrounding them follow? Do you think the Israelites were “star struck” by the endless ceremonies and rituals to the heathen gods? Wouldn’t you like to see their dances up close? Why do you think many of God’s people drifted into idolatry when they were being led by one almighty God? How does the first commandment proclaim the oneness of God? How can Christians slip away from a saving relationship with one God and seek the pleasures of idolatry? Or can they?

3. The deity of Christ. Have you ever met a Christian who couldn’t accept the divinity of Christ? Why is it sometimes hard for us to think kind thoughts toward someone who denies that Jesus was fully God? Or should we be kind to someone in error? If it’s hard for people today to accept that Jesus was God, what was it like when He had the flesh and blood and emotions and other characteristics of a human being? Why is seeing Christ as God so important to our salvation? Couldn’t we be saved without Jesus’ ministry? Weren’t the Old Testament believers saved without Jesus? Explain.

5. United and Equal. Would you say it is a heavenly irony that God, being more than one person, is in total agreement all the time? How can three separate persons have no differing opinions or beliefs? Does one member of the Trinity control the content of the Godhead’s ability to think and plan? On this world, do powerful people naturally agree with each other? Do we need to study and even covet the unity and equality of God, Jesus, and the Holy Spirit? When mankind was created, what was the family resemblance? Do you think the people who live and work today still look a bit like God? Can you and I obtain a more peaceful and loving countenance if we hold on to the Godhead?

6. Salvation and the Trinity. Can you imagine being saved from the throes of sin with any one of the Trinity missing? Would you agree that it’s not possible to “choose” one member of the Trinity over the others? Why are so many people quick to decide that Jesus was nothing more than a human being who followed God? What is the temptation to deny Him His divinity? What does such an attitude do to the plan of salvation? Are you rejoicing to enter the new year with the Trinity on your side? Or with yourself on the side of the Trinity? What will be the result?