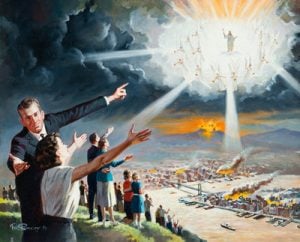 This means everyone who has died will come back to life again. Some for eternity, and others long enough to see their condemnation is just, and then to die for eternity.

Paul was aware of separate resurrections for the saved and unsaved when he wrote that when Christ comes the saved will rise first.

For the Lord Himself will descend from heaven with a shout, with the voice of an archangel, and with the trumpet of God. And the dead in Christ will rise first. 1 Thessalonians 4:16 NKJV

The saved will then judge the unsaved for a thousand years.

And I saw thrones, and they sat on them, and judgment was committed to them….. And they lived and reigned with Christ for a thousand years. But the rest of the dead did not live again until the thousand years were finished. This is the first resurrection. Blessed and holy is he who has part in the first resurrection. Over such the second death has no power…Revelation 20:4-6 NKJV

The saved only die once. When they are resurrected in the first resurrection they will live eternally. They will not die a second time. But when the unsaved are resurrected at the end of the thousand years, Satan will tempt them to try and destroy the New Jerusalem, and that is when the fire will come down from God and destroy them. They will be tormented day and night forever, or in other words for the rest of their lives-until they die, and will never live again.

Now when the thousand years have expired, Satan will be released from his prison and will go out to deceive the nations which are in the four corners of the earth, Gog and Magog, to gather them together to battle, whose number is as the sand of the sea. They went up on the breadth of the earth and surrounded the camp of the saints and the beloved city. And fire came down from God out of heaven and devoured them. The devil, who deceived them, was cast into the lake of fire and brimstone where the beast and the false prophet are. And they will be tormented day and night forever and ever. Revelation 20:7-10 NKJV

The unsaved will then experience the second-eternal death, never to live again, while the saved enjoy the new earth for all eternity, never to die again. We see these concepts in the story where Jesus resurrected Lazarus.

When Jesus first heard Lazarus was sick He said,

This sickness is not unto death…John 11:4 NKJV

Yes, Lazarus died, but that was not the end of the story. Jesus raised Lazarus back to life! So we can be sure that when our loved ones, who are in Christ die, that is not the end of their story either. They will be raised back to eternal life. Another reason why Jesus may have said Lazarus’ sickness was not unto death, is because Jesus refers to the first death as sleep, since after all, after the first death everyone will be woken up again at one of the resurrections.

Lazarus’ sisters were disappointed, when Jesus allowed him to die. Jesus said something very interesting to his sister.

Jesus said to her, “I am the resurrection and the life. He who believes in Me, though he may die, he shall live. And whoever lives and believes in Me shall never die. John 11:25-26 NKJV

What did Jesus mean by “though he may die, he shall live?” I believe Jesus was referring to the first resurrection, where the dead in Christ will live to never die again. What did Jesus mean by “whoever lives and believes in me shall never die?” Remember Jesus referred to Lazarus sleeping. Jesus refers to the first death as sleep. If we live and believe in Jesus we may sleep, but we will be raised to life in the first resurrection, to live for eternity, and will never die the second death of the unsaved, which is the true and eternal death.

This is where we see the amazing love of Jesus! Jesus tasted the second death for us!

He, by the grace of God, might taste death for everyone. Hebrews 2:9 NKJV

Jesus calls the death before the resurrection, “sleep.” Hebrews 2:9 does not say that Jesus “slept” for everyone, but “died” for everyone. Revelation 14:10 speaks of the unsaved drinking from a cup. I believe that is the cup that Jesus chose to drink for us in Gethsemane. See Matthew 26:36-46. I believe the cup in Matthew 26 and Revelation 14 is the second death. Remember, Jesus does not save us from the first death, which He calls sleep. We die that death ourselves. Jesus saved us from the second death, and therefore must have tasted the second death. An inspired writer, who wrote very passionately and lovingly about Jesus’ sacrifice agrees.

Satan with his fierce temptations wrung the heart of Jesus. The Saviour could not see through the portals of the tomb. Hope did not present to Him His coming forth from the grave a conqueror, or tell Him of the Father’s acceptance of the sacrifice. He feared that sin was so offensive to God that Their separation was to be eternal. Christ felt the anguish which the sinner will feel when mercy shall no longer plead for the guilty race. It was the sense of sin, bringing the Father’s wrath upon Him as man’s substitute, that made the cup He drank so bitter, and broke the heart of the Son of God. -Ellen White, Desire of Ages, Page 753.

When Lazarus died or fell asleep as Jesus called it, He told his sister Martha,

Because of Jesus dying the second death in our place, if you have a brother or sister sleeping in Christ, you may say with Martha,

“I know that he will rise again in the resurrection at the last day.” John 11:24 NKJV

And when those who are sleeping in Christ are awaken, they will live forever never to taste the second death.