“For the weapons of our warfare are not carnal but mighty in God for pulling down strongholds, casting down arguments and every high thing that exalts itself against the knowledge of God, bringing every thought into captivity to the obedience of Christ” (2 Corinthians 10:4-5, NKJV). 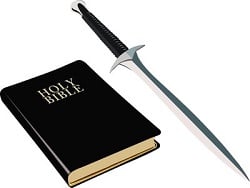 [Thought questions for Obedience: The Fruit of Revival July 31, 2013]

1. Key text. Consider the words in the key text, above, for this week: “weapons,” “warfare,” “casting down,” “captivity,” “obedience.” Why did God impress these strong words on Paul as he addressed the spiritual needs of the Corinthians? Suppose you were to receive a personal letter from the president of your local conference or mission. Would you expect a message like this? How might you respond if you did?

2. Revival in Wales. What was the single most powerful influence in establishing a strong Christian presence in Wales in 1904? Do you think the Holy Spirit is under-employed in most of our churches? Is He ready and willing and able to take a lead role in our work as church members? Is it always easy for truly converted people to obey God?

3. Transformed life. Have you noticed a strong entertainment element in some of the messages preached by popular evangelists today? Why do so many members of the public turn from a pastor who calls on listeners to repent, stop sinning, and obey God? Are you so transformed by God’s spirit that you welcome every call to obey Him? Or would you prefer for the “o” word to be deleted or at least minimized in our message? Do preachers and teachers ever over-emphasize the “captivity” of “obedience”? Is it possible to be “too obedient”?

4. High cost of obedience. Why was Stephen stoned to death? What line did he cross that made him unacceptable to the religious leaders of his day? Are you apprehensive about calling on leaders to give heed to the Word of God? Could you ever be bold like Stephen and call sin by its right name? Or is this the right time to be encouraging martyrdom? How can we know when we should be more forthright and when we should be less strident in our proclamation of God’s Word?

5. The Spirit surprises. How sure was Saul that he was doing the right thing in persecuting early Christians? How much support did he have? Why did God take such a dramatic step as Saul traveled on the Damascus Road? Wasn’t that a huge risk to take? Why didn’t Paul, as he was then named, continue his ministry on his own? What did he do instead? Is there a lesson there for us? What might that be?

6. Being sensitive to the Spirit’s call. Did the Holy Spirit speak with equal power to both Paul and King Agrippa? Or did He reserve the might of His message for the apostle who would lead the believers in establishing a worldwide movement? Have you ever heard someone say something like “Almost thou persuadest me to be a Christian?” Instead, what comments might people make when they are impressed by our witness but turn away from full commitment?

7. Spirit-led obedience. How do we reconcile God’s highest priority for our freedom with what seems to be an equally high priority on our obedience? Can the love of freedom be transposed into the joy of obedience? When in life is obedience of any kind most difficult? How is obedience to God and His will for us totally different from obedience to fellow man? Or is it?