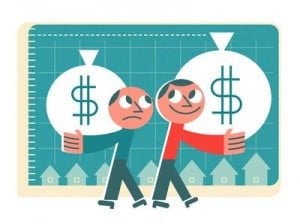 He gave justice and help to the poor and needy, and everything went well for him. Isn’t that what it means to know me?” says the Lord. Jeremiah 22:16 NLT

George W. Jenkins not only began his Publix grocery store incorporation during the depression, but he also set up several foundations and charities so that even after his death, in 1996, he could continue giving to the community and those less fortunate. After setting up and giving to so many charities, someone asked Jenkins what he would be worth had he not given so much away. He quickly answered, “probably nothing.” Jenkins saw his worth in what he could give instead of in what he could get. He did not figure he would be worth anything if he could not give. Unfortunately four of the “Last Five Kings of Judah” did not share that understanding. Only Josiah recognized that his worth lay in serving the Lord by serving his people. One of my favorite quotes that helps us keep a perspective on money is,

“Some people are so poor, all they have is money.”

This quote reminds us that life is not about things. Jesus says,

Guard against every kind of greed. Life is not measured by how much you own. Luke 12:15 NLT

Jesus goes on to say,

..a person is a fool to store up earthly wealth but not have a rich relationship with God.” Luke 12:21 NLT

Life is about relationships not money and things. Another one of my favorite quotes is,

Several years ago my friend’s daughter was having her 12th birthday during a holiday season, and I felt bad for her almost being “forgotten” with so many other celebrations. I gave her a card and twenty dollars, which I thought was a generous gift back then. Later I found out she had taken my gift along with the rest of the money she had been given and gave it to a fund at our church to help parents with children in the hospital. Turns out my young friend did not need to be remembered with money. She did not need money at all. She needed to be a blessing to others. I reckon she too figured she would be worth nothing if she was not giving to others. So, what are you worth?