Read James 5:17-18. What do we learn about prayer from Elijah’s example? How is it connected with healing, forgiveness, and restoration? 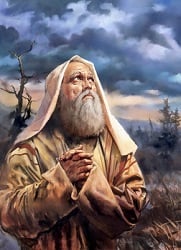 These verses illustrate the assurance given at the end of James 5:16: the effective prayer of a righteous man can accomplish much (NASB). Elijah was a righteous man and even translated to heaven, but he was not superhuman. He had the same passions and feelings that we have. The fact that God heard his prayer should encourage us that our prayers will be heard too. James says Elijah prayed earnestly that it might not rain (a detail not mentioned in the Old Testament), petitioning apparently for the fulfillment of Deuteronomy 11:13-17 (alluded to in James 5:18).

Israel’s worship of Baal, the god of storm and lightning, could not go unchallenged on the basis of this prophecy in Deuteronomy. Though we do not know how long Elijah prayed before his prayers were answered, his petitions were based on careful study of, and reflection upon, God’s Word in light of his present circumstances. It may be that he quoted Deuteronomy’s prophecy as part of his prayer, just as Daniel’s prayer for Jerusalem is based on his study of Jeremiah’s prophecy (see Dan. 9:2-3). Our prayers, too, will be more effective when they spring from thoughtful consideration of our circumstances in light of God’s Word.

The period of no rain lasting three and a half years (also mentioned in Luke 4:25) is a significant time of probation in Scripture (like the prophetic period of half a week, or three and a half years of Jesus’ ministry in Daniel 9:27, and the three and a half times of apostasy in Christianity in Daniel 7:25 and Revelation 12:14). At the end of this period, God used Elijah to begin a work of revival and reformation to wake up Israel so that the people would recognize the depths of their apostasy. It was a work that typified both the work John the Baptist would do for first-century Israel in order to prepare the way for Christ’s first advent and the work that God has entrusted to His remnant church today to prepare people for the Second Advent(see Mal. 4:5-6; Matt. 11:13-14).

As a church, we are seeking revival and reformation. But it must begin in our own lives, our own selves, on a personal and daily basis. What choices can only you, yourself, make that will determine the direction and, ultimately, the destiny of your life?