After three months in Malta, Paul and his companions were finally able to continue their journey (Acts 28:11). They arrived in Puteoli (Acts 28:13)—modern Pozzuoli, in the Bay of Naples—from where they would travel to Rome by road (see Acts 28:11-16).

The news of Paul’s approach quickly reached Rome, and from there a group of believers traveled several miles south to welcome him. 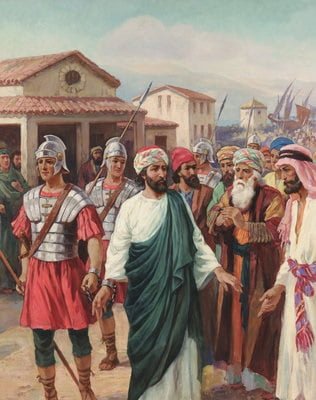 Though he had never been to Rome, the apostle had numerous friends in the city: co-workers, converts, relatives, and many others who were very dear to him (Rom. 16:3-16). The meeting on the Appian Way must have been particularly moving, especially in view of the shipwreck and the fact that Paul was now a prisoner. As a result of such a unique demonstration of love and care on the part of his beloved friends, the apostle thanked God and felt deeply heartened as he was about to face trial before the emperor.

In his official report, Festus certainly must have written that according to Roman law, Paul was not guilty of any significant crime (Acts 25:26-27; Acts 26:31-32). This probably explains why he was allowed to rent a private dwelling (Acts 28:30) instead of being sent to a regular prison or military camp, though after Roman fashion he was chained to a soldier the whole time. That Paul was at his own expense implies he was able to carry on his own trade (Acts 18:3).

Though Paul could not go to the synagogue, the synagogue could come to him. So, soon after his arrival, following his policy of going first to the Jews (Rom. 1:16), he called together the local Jewish leaders to state his innocence and explain, as he had done before, that he had been arrested for no reason other than the hope of Israel (Acts 23:6, Acts 24:15, Acts 26:6-8). His intention was not so much to defend himself as to create an atmosphere of trust that allowed him to preach the gospel, showing how Jesus’ resurrection was the fulfillment of Israel’s ancestral hope. Surprised that they had not received any information from Jerusalem about Paul, the Jews decided to hear him.